Top 10 Python Frameworks That You Should Try in 2021

The framework is a type of abstraction that is tested, optimized, efficient, and robust to make the application programming a lot easier. It takes care of several pre-built functionalities like handling and processing input or managing hardware and system software. Using a framework reduces bugs and makes it simpler to work on sophisticated technologies since the developer now has to focus on the high-level functionalities and the logic rather than the low-level functionalities. 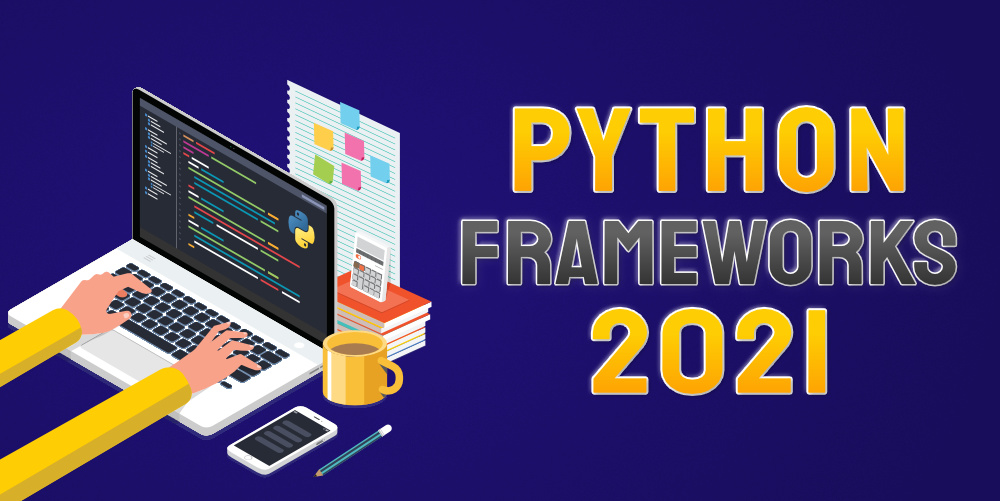 Python in particular has the most widely used frameworks due to its ease of development and a shallow learning curve. According to the recent Stack Overflow 2020 survey, it was noted that 55% of the developers use the two most common Python web frameworks, i.e., Django and Flask and would love to continue with it. Also, Django is the 4th most wanted web framework according to the survey. Python frameworks are more in demand because Python is open source and is being used and developed by millions of developers around the globe. It is highly scalable and meets industry standards in terms of integration, automation, development, and testing. We are now going to look at the top 10 Python frameworks that you should definitely try in 2021!

It is a full-stack python framework and the most loved one, being in the top 5 web frameworks in 2020. It is free to use and is open source with a huge number of functionalities it provides to make web development a lot easier. It assists in developing and delivering extensively scalable and fast, robust web apps. It comes with exhaustive documentation and community support. It contains built-in packages and ready-to-use libraries. Along with this, it also provides URL routing, database version control, and schema migrations, authentication support, web server support, template engine, an object-relational mapper (ORM).

Flask is considered the best python microframework and is extremely lightweight, adaptable, and has a modular design. It is open-source and is compatible with Google App Engine. It has improved and secure support for cookies for establishing client-side sessions and offers suggestions rather than enforcing any dependencies. Flask has a built-in development server, HTTP request processing, and Jinja2 templating. It has minimal architecture and includes unit-testing support. Some more features of the flask are object-relational mapping, flexible app structure for file storage, built-in debugging which is very fast, uses Unicode, and is fully WSGI compliant.

Pyramid is another full-stack python framework whose primary aim is to build applications of any complexity with ease. It provides extensive testing support and offers flexible tools for development. Pyramid makes it easy to send Ajax requests with the help of function decorators. It has a flexible approach for secure authorization and authentication. It makes web application development and deployment much more fun, predictable, and productive with easy URL generation, renderers, predicates and templating, and asset specifications. Other features of the pyramid include quality measurement, security management, templating, comprehensive documentation, and HTML structure generation.

It is one of the oldest popular python microframeworks, being used since 2002, and therefore it is very stable. It has a minimalist approach and mainly uses the object-oriented paradigm for developing applications. It provides built-in plugins and a powerful configuration system. It is HTTP/1.1 compliant and is compatible enough to run multiple HTTP servers simultaneously. It also provides a production-ready WSGI thread-pooled webserver and has inbuilt support for coverage, profiling, as well as testing. It contains tools for sessions, caching, static content, encoding, and a lot more. It is extremely customizable and runs on Android, Python 3.5+, PyPy, and Jython.

It is an open-source, therefore free full-stack python based web framework that is used for the fast development of highly scalable, secure, and portable web-based applications that are database-driven. This framework efficiently organizes the python application development procedure through a web server, an SQL database, and an online interface. It also enables clients to build, structure, manage and deploy web-based applications through web browsers. It has a built-in system for issuing tickets in case something goes wrong. Web2Py is easily adaptable, i.e., it is backward compatible and has huge community support. Some of its other features include built-in data protection, modular MVC architecture support, built-in data protection and data security, and role-based access control.

TurboGears is a popular python web framework that is based on the ObjectDispatch paradigm. It can be used to build small and concise applications in the minimal or the microframework mode or complex applications in the full-stack mode. It is mainly used for data-driven web apps and is open source with extensive documentation. It is highly scalable and provides MochiKit JavaScript library integration. All its features are implemented as function decorators and have multi-database support. It provides ToscaWidgets which is used for easy coordination of frontend and server deployment. It has an MVC style architecture, provides validation support with FormEncode, and uses pylons as a web server. It is highly modular and has the availability of command-line tools and PasteScript templates.

It is a semantic python based web app framework that is licensed under the LGPL license. This framework assists developers to build web applications by reutilizing components that are called cubes. It follows an object-oriented design making the code more efficient and simpler to read and debug. It simplifies data related queries with RQL or Relational Query Language embedding which provides a simple syntax for relationship queries, manage data repositories, and view attributes and relationships. Other features include semi-automatic mechanisms for XHTML/XML/JSON/text generation, security workflows and Web Ontology Language, LDAP directories, and reliability of storage backends.

With the rise in interest in ML and Data Science fields, it is now the most downloaded python framework used for building analytical machine learning & data science web applications and is built on Plotly.js, React, and Flask. It provides a high level of customization and has inbuilt error processing, LDAP integration, and URL routing through its deployment server. It also provides plugin support and contains a user-friendly interface for combining UI controls such as graphs, dropdowns, sliders, etc. It issues multi-user support and many users can have multiple sessions and has a high level of scalability.

It is an extremely secure and reliable Python web framework for building high-performance large-scale app backends, APIs, and microservices. It promotes the HTTP and REST architectural style and has 100% code coverage. It has a highly optimized, extensible, and efficient code base and routing through URI templates and REST-inspired resource classes. It assists in unit testing through WSGI helpers and mocks with additional features being the processing of DRY requests by hooks and middleware components, Cython support giving extra speed boost, and natural and figurative HTTP responses.

The bottle is a simple, fast, and lightweight WSGI web-based microframework for python. It has no dependencies other than the Python Standard Library and is distributed as a single file module. It was originally developed for building APIs and is suitable for building simple prototypes and apps for personal use. Additional features include an inbuilt HTTP server, WSGI support, plugin support for various databases, adapter support for template engines, and URL parameter support.

These were the top 10 Python frameworks that are in demand and whose demand will grow in 2021. Therefore you should for sure get hands-on with a few of them and build some cool frameworks!