Imagine the next time you go to a restaurant, your chef is a robot! Or maybe your doctor is a robot when you have an operation! It’s even possible that the next time you go to Japan, your customer service agent is also a robot! While this is an exaggeration and robots are not becoming chefs and doctors, they are becoming widely used in these industries for food preparation, healthcare, etc. In fact, robots have a wide range of applications in almost all industries these days because of their precision and convenience. 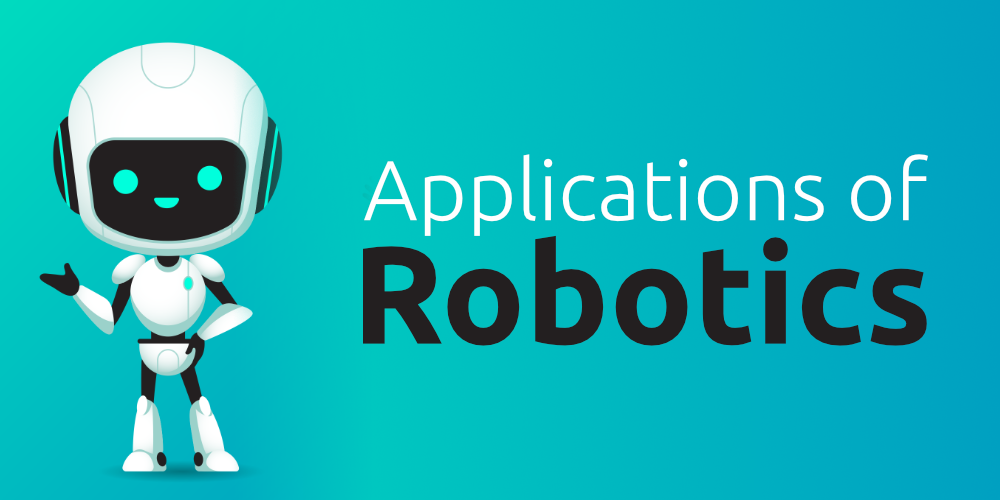 There are many jobs in industries like manufacturing, agriculture, entertainment, etc. which require boring monotonous work that also requires a lot of precision. In such situations, robots are better suited than humans because they are precise, intelligent, and don’t get bored like humans! There are also tasks like space and underwater exploration that are very dangerous and unsafe for humans. Here also, robots are the best fit because they never get tired and there is no chance of a robot getting killed! Because of these advantages, there are many applications of robots in almost all the industries you can imagine. But let’s see the top applications in these 10 industries now.

Imagine if all the security guards are robots? Even thieves would be scared! That’s why robots are being proposed as security agents as they can protect humans, and they wouldn’t be in danger like human security guards would be. Currently, robotics companies are working on pairing robot guards with human security consultants. A very famous company in this field is Knightscope in the United States that has autonomous security robots capable of assisting human security guards with real-time, actionable intelligence. These robots can help with crimes such as armed robberies, burglaries, domestic violence, fraud, hit, and runs, etc.

There are many things in space that are very dangerous for astronauts to do. Humans can’t roam on Mars all day to collect soil samples or work on repairing a spaceship from the outside while it’s in deep space! In these situations, robots are a great choice because there are no chances for the loss of human life then. So space institutions like NASA frequently use robots and autonomous vehicles to do things that humans can’t. For example, Mars Rover is an autonomous robot that travels on Mars and takes pictures of Martian rock formations that are interesting or important and then sends them back on Earth for the NASA scientists to study.

Robots are also a big draw in the entertainment industry. While they cannot exactly become actors and actresses, they can be used behind the sets in movies and serials to manage the camera, provide special effects, etc. They can be used for boring repetitive tasks that are not suitable for a human as cinema is, after all, a creative industry. Robots can also be used to do stunt work that is very dangerous for humans but looks pretty cool in an action movie. Theme parks like Disney World are also using autonomous robots to enhance the magical experience of their customers.

Agriculture is the sector that is the basis of human civilization. However, agriculture is also a seasonal sector that is dependent on ideal weather conditions optimal soil, etc. Moreover, there are many repetitive tasks in agriculture that are just a waste of farmer’s time and can be performed more suitable by robots. These include seeding, weed control, harvesting, etc. Robots are usually used for harvesting the crops which allow farmers to be more efficient. An example of a robot that is used to remove weeds in farms is the Ecorobotix. It is powered by solar energy and can be used to target and spray weeds using a complex camera system.

Robots have changed healthcare a lot. And all for the better! They can help doctors in performing operations more precisely, be used as prosthetic limbs, provide therapy to patients, etc. The possibilities are limitless. One example of this is the da Vinci robot that can help surgeons in performing complex surgeries relating to the heart, head, neck, and other sensitive areas. There are other robotic devices that are created like exoskeletons that can be used to provide additional support for people undergoing rehabilitation after spinal injures, strokes, etc.

Robots are a great option for exploring places that humans cannot reach easily, like the depths of the ocean! There is a lot of water pressure deep in the ocean which means humans cannot go that down and machines such as submarines can only go to a certain depth as well. A deep underwater is a mysterious place that can finally be explored using specially designed robots. These robots are remote-controlled, and they can go into depths of the ocean to collect data and images about the aquatic plant and animal life.

Don’t want to cook? Don’t worry, there are robots that even can cook and create complete meals for you! These robot chefs can create food using hundreds of different recipes. All humans need to do is choose the recipe they want and provide the robot with pre-packaged containers of all the ingredients that are needed for that recipe. The robot can then cook the food on its own. Moley Robotics is one such robotics company that has created a robotic kitchen with a robot that can cook like a master chef! So no worries if you can’t cook food. Because now a robot can!

There are many repetitive and common tasks in the manufacturing industry that don’t require any usage of the mind like welding, assembly, packing, etc. These tasks can be easily done by robots while leaving the mentally challenging and creative tasks to humans. These robots can be trained to perform these repetitive and monotonous tasks with precision under the guidance and supervision of a human. This option is also best for the manufacturing processes that are dangerous and may be harmful to humans.

Robots also have many applications in the military. They can be used as drones to keep surveillance on the enemy, they can also be used as armed systems to attack the opposing forces or as Medicare agents to help friendly forces. Some of the popular robots used in the Military sector include MAARS (Modular Advanced Armed Robotic System) which looks like a tank and contains tear gas and lasers to confuse enemies and even grenade launcher for desperate situations. DOGO is also a tactical combat robot that has a camera for spying on the activities of the enemy and a 9-millimeter pistol for emergency situations!

There are robots that are developed to look exactly like humans for cosmetic purposes. These robots are primarily used in the field of customer service in high visibility areas to promote robotics. One such example is Nadine, a humanoid robot in Singapore that can recognize people from previous visits, make eye contact, shake hands, continue chatting based on previous meetings, etc. Another such customer service robot is Junko Chihira in Japan, a humanoid robot working at the tourist information center in Aqua City Odaiba, a shopping center on Tokyo’s waterfront.

Now you have seen the various applications of robots in different industries. Robots are used these days for everything ranging from security guards, chefs, doctor’s assistants, customer service agents, and even a one-man army in war! There are many other applications of robots as well because of their precision and programming to perform various tasks that are dangerous, boring, or repetitive to humans. Robots can do all the physically demanding tasks that are difficult or impossible for humans, and they are even becoming smarter and smarter with the advances in artificial intelligence. All in all, robots can be the perfect helper for humans and solve many problems in different industries.