The p-block, which spans groups 13 to 18, is located on the right side of the normal periodic table. Their electrical configuration is ns2 np1–6 in general. Despite being the first element in group 18, helium is not part of the p-block. Except for the first row, each row in the table has six p-elements.

The only block with all three categories of elements: metals, nonmetals, and metalloids is this one. On a group-by-group basis, the p-block elements are group 13, icosagens; 14, crystallogens; 15, pnictogens; 16, chalcogens; 17, halogens; and 18, the helium group, which includes noble gases (except helium) and oganesson. The p-block can also be defined as including post-transition metals, metalloids, reactive nonmetals, such as halogens, and noble gases.

When sulphur-containing materials, such as metal, are heated, such as when smelting metal or burning coal or oil, sulphur dioxide is produced as a waste gas. It is a significant contaminant that is presently seen as a threat to the environment.

A sigma (σ) and (π) connection connects each oxygen atom in the Sulphur dioxide molecule to the Sulphur atom. The sp2–p overlap forms the σ bonds between Sulphur and Oxygen atoms, whereas one of the π links is created by pπ–pπ overlap and the other by pπ–dπ overlap. 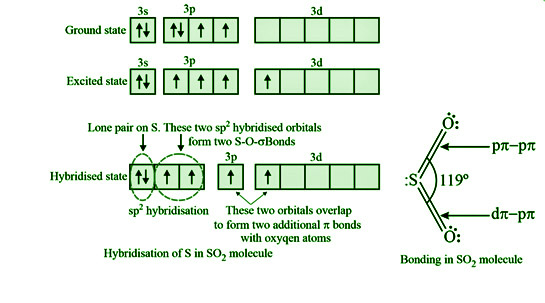 One electron from the 3p orbital moves to the 3d orbital during the synthesis of SO2, and S undergoes sp2 hybridization. Two of these orbitals have sigma bonds with two oxygen atoms, whereas the third has a single pair. Each of the p-orbital and d-orbital electrons are unpaired. One electron makes a pπ–pπ link with one oxygen atom, while the other forms a pπ–dπ bond with the other. This is why SO2 has a bent structure with a 143 pm bond length.

Due to resonance, however, both S–O bonds are identical.

Sulphur dioxide and traces of sulphur trioxide (6–8%) are generated when sulphur is burned in the air.

Copper turnings are gently heated in a flask with strong sulfuric acid to produce sulphur dioxide.

This reaction takes place in the presence of catalysts such as platinized asbestos, vanadium pentoxide, and others. When sulphur dioxide is heated, it interacts with oxygen to generate sulphur trioxide.

It lowers the acidified potassium permanganate solution, releasing the pink colour of KMnO4.

SO2‘s bleaching effect is quite transient. Due to oxidation by air, the bleached colourless chemical will gradually recover its original colour standing in the air.

The existence of this gas can be detected by reducing an acidified potassium permanganate solution. The pink colour of KMnO4 is released, indicating that sulphur dioxide gas is present.

When molecules like sulphur dioxide and nitrogen oxides are released into the air, a chemical reaction occurs, resulting in acid rain. Sulfuric and nitric acids are formed when these substances combine with water, oxygen, and other chemicals. Acid rain is formed when these acids fall to the earth.

Question 2: What are the uses of sulphur dioxide?

Question 3: What are the physical properties of sulphur dioxide?

Question 4: What will happen when sulphur dioxide reacts with chlorine?

Sulphuryl chloride is formed when SO2 interacts with chlorine in the presence of charcoal. The use of charcoal as a catalyst aids the process.

Question 5: What will happen when sulphur dioxide reacts with sodium hydroxide?

Question 6: What is the confirmatory test to detect the presence of Sulphur dioxide gas?

The existence of this gas can be detected by reducing an acidified potassium permanganate solution. The pink colour of KMnO4 is released, indicating that sulphur dioxide gas is present.