In this article, we will discuss how to format string Python.

String formatting is the process of infusing things in the string dynamically and presenting the string.

There are four different ways to perform string formatting in Python:

So we will see the entirety of the above-mentioned ways, and we will also focus on which string formatting strategy is the best.

It is the oldest method of string formatting. Here we use the modulo % operator. The modulo % is also known as the “string-formatting operator”.

You can also inject multiple strings at a time and can also use variables to insert objects in the string.

‘%s’ is used to inject strings similarly ‘%d’ for integers, ‘%f’ for floating-point values, ‘%b’ for binary format. For all formats, conversion methods visit the official documentation.

Float precision with the placeholder method

Floating-point numbers use the format %a.bf. Here, a would be the minimum number of digits to be present in the string; these might be padded with white space if the whole number doesn’t have this many digits. Close to this, bf represents how many digits are to be displayed after the decimal point.

Let us see a few examples:

Example 3: You can use multiple format conversion types in a single print statement

Note: To know more about %-formatting, refer to String Formatting in Python using %

Format() method was introduced with Python3 for handling complex string formatting more efficiently. Formatters work by putting in one or more replacement fields and placeholders defined by a pair of curly braces { } into a string and calling the str.format(). The value we wish to put into the placeholders and concatenate with the string passed as parameters into the format function.

The.format() method has many advantages over the placeholder method:

The type can be used with format codes:

Note: To know more about str.format(), refer to format() function in Python

PEP 498 introduced a new string formatting mechanism known as Literal String Interpolation or more commonly as F-strings (because of the leading f character preceding the string literal). The idea behind f-strings is to make string interpolation simpler.

To create an f-string, prefix the string with the letter “ f ”. The string itself can be formatted in much the same way that you would with str.format(). F-strings provide a concise and convenient way to embed python expressions inside string literals for formatting.

This new formatting syntax is very powerful and easy. You can also insert arbitrary Python expressions and you can even do arithmetic operations in it.

We can also use lambda expressions in f-string formatting.

Float precision in the f-String method:

Note: To know more about f-strings, refer to f-strings in Python

In the String module, Template Class allows us to create simplified syntax for output specification. The format uses placeholder names formed by $ with valid Python identifiers (alphanumeric characters and underscores). Surrounding the placeholder with braces allows it to be followed by more alphanumeric letters with no intervening spaces. Writing $$ creates a single escaped $: 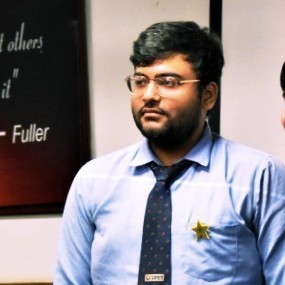