The reconciliation process makes React work faster. Reconciliation is the process through which React updates the Browser DOM.

Important concepts behind the working of the Reconciliation process are:

The term rendering in React can closely be identified as making or becoming. In traditional rendering, Browser does the following tasks:

This rendering by Browser has a sequence of steps and is rather costly in nature. The concept of Virtual DOM used by React makes rendering much faster.

Virtual DOM: React renders JSX components to the Browser DOM, but keeps a copy of the actual DOM to itself. This copy is the Virtual DOM. We can think of it as the twin brother of the real or Browser DOM. The following actions take place in React: 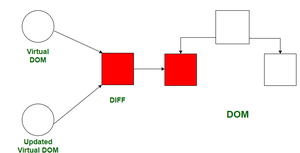 Suppose we have new data similar to the previous one, Virtual DOM compares previous and new structures and sees that it has no change, so nothing gets rendered to the Browser. This is how the Virtual DOM is helping to enhance the Browser performance.

How does this Virtual DOM compare itself to its previous version?

This is where the Diffing Algorithm comes into play. Some concepts used by this Algorithm are: 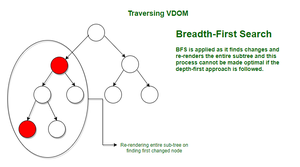