Passing and Returning Objects in Java

Although Java is strictly passed by value, the precise effect differs between whether a primitive type or a reference type is passed. When we pass a primitive type to a method, it is passed by value. But when we pass an object to a method, the situation changes dramatically, because objects are passed by what is effectively call-by-reference. Java does this interesting thing that’s sort of a hybrid between pass-by-value and pass-by-reference.
Basically, a parameter cannot be changed by the function, but the function can ask the parameter to change itself via calling some method within it. 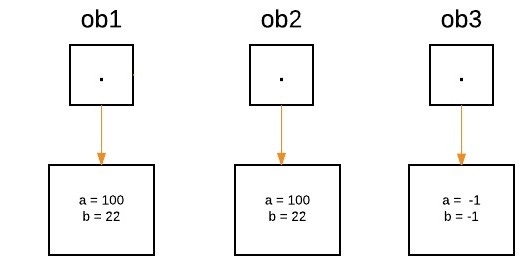 From the method side, a reference of type Foo with a name a is declared and it’s initially assigned to null.

As we call the method equalTo, the reference ‘o’ will be assigned to the object which is passed as an argument, i.e. ‘o’ will refer to ‘ob2’ as the following statement execute. 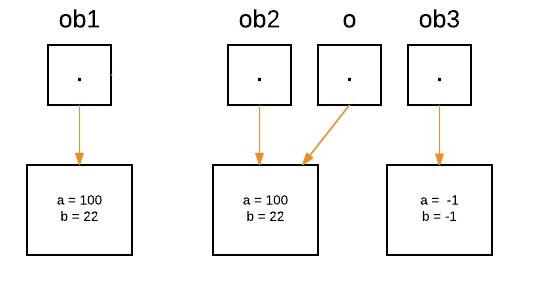 Now as we can see, equalTo method is called on ‘ob1’ , and ‘o’ is referring to ‘ob2’. Since values of ‘a’ and ‘b’ are same for both the references, so if(condition) is true, so boolean true will be return.

Again ‘o’ will reassign to ‘ob3’ as the following statement execute. 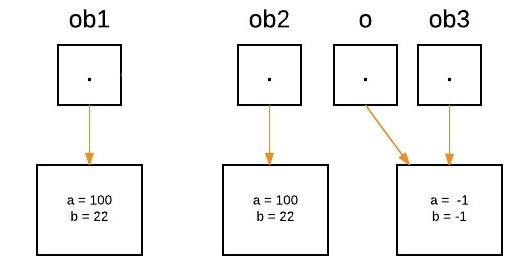 In Java we can pass objects to methods as one can perceive from the below program as follows:

One of the most common uses of object parameters involves constructors. Frequently, in practice, there is a need to construct a new object so that it is initially the same as some existing object. To do this, either we can use Object.clone() method or define a constructor that takes an object of its class as a parameter.

In java, a method can return any type of data, including objects. For example, in the following program, the incrByTen( ) method returns an object in which the value of an (an integer variable) is ten greater than it is in the invoking object.

Note: When an object reference is passed to a method, the reference itself is passed by use of call-by-value. However, since the value being passed refers to an object, the copy of that value will still refer to the same object that its corresponding argument does. That’s why we said that java is strictly pass-by-value.

My Personal Notes arrow_drop_up
Previous
How are Java objects stored in memory?
Next
Lambda Expressions in Java 8
Recommended Articles
Page :
Returning Multiple values in Java
11, Apr 16
Spring Boot - AOP After Returning Advice
22, Feb 22
Differences between Dynamic Binding and Message Passing in Java
15, Jan 20
Message Passing in Java
09, May 19
Parameter Passing Techniques in Java with Examples
20, Feb 19
getParameter() - Passing data from client to JSP
09, Jun 18
Program to find equation of a plane passing through 3 points
08, Aug 18
Java.util.Objects class in Java
13, Nov 17
equals() on String and StringBuffer objects in Java
18, Feb 18
Understanding Classes and Objects in Java
11, Sep 18
Classes and Objects in Java
07, Feb 17
Difference Between Equality of Objects and Equality of References in Java
15, Jul 22
Comparison of Autoboxed Integer objects in Java
25, Sep 14
How to swap or exchange objects in Java?
30, Jan 16
How to prevent objects of a class from Garbage Collection in Java
06, Jun 18
Using TreeMap to sort User-defined Objects in Java
03, Oct 18
Count number of a class objects created in Java
09, Nov 18
How to Merge Two LinkedHashSet Objects in Java?
10, Dec 20
How to Create Array of Objects in Java?
30, Aug 20
Java Program to Sort ArrayList of Custom Objects By Property
16, Nov 20
Java Program to Compare Two Objects
06, Dec 20
How to Add Custom Class Objects to the TreeSet in Java?
16, Dec 20
Printing TreeMap Having Custom Class Objects as Keys or Values in Java
02, Jan 21
How to Create TreeMap Objects using Comparable Interface in Java?
20, Dec 20
Article Contributed By :