WMAN : Wireless Metropolitan Area Network (WMAN) is a type of Metropolitan Area Network (MAN) and the only thing is that the connectivity is wireless. It spans multiple locations within a geographic area and it serves the range greater than 100 meters. It is one type of wireless networking which has a coverage area approximately the size of a city. Generally it spans or covers an area which is larger than the Wireless Local Area Network (WLAN) but smaller than Wireless Wide Area Network (WWAN). WMAN connections can be Point to Point or Point to Multipoint networks. It is a newer type networking technology which supplements to some wired technologies like Gigabit Ethernet, Resilient Packet Ring (RPR), SONET over IP etc.

A WMAN is mostly governed by a single entity such as an Internet Service Provider (ISP), government entity, or any other large corporation. A the user has to take the authorized access from the providers to use WMAN as the access is restricted only to the authorized users/subscribers.
The below figure illustrates a WMAN 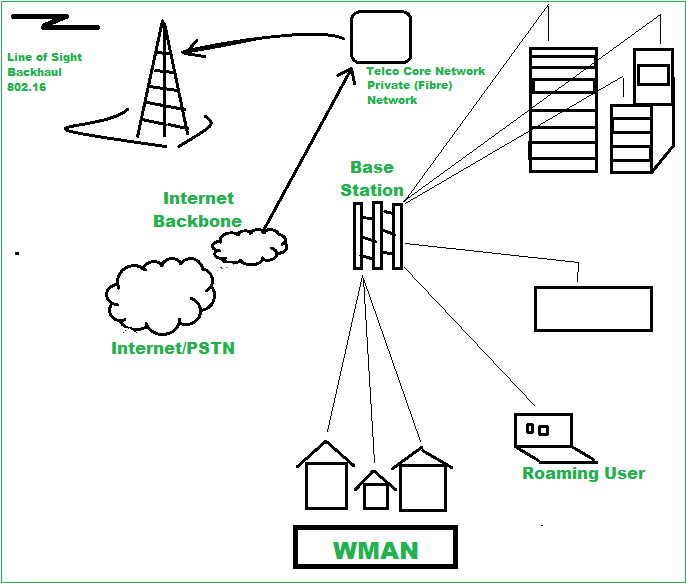 Types of WMAN :
There are two fundamental types of wireless MAN i.e.

1. Back haul –
It is an enterprise type of network , cellular-tower connection. It can also use WiFi hotspot. In this type of network fixed wireless is used which saves large amount of money per year. Digital Subscriber Line (DSL) can also be used in Back haul, but Wireless connection is faster and less cost than normal fiber optics connection.

2. Last mile –
It is used for temporary networks means where network requirement is for a temporary period. Like some large construction buildings/sites where conventional network service ( like DSL broadband and cable modem) is disrupted.