Git provides an option to keep a track on our project progress from revisiting older commits to mending our mistakes and undoing changes. It gives the user to option to review his/her work. Following commands performs similar function.

git revert: As the name suggests, this command is used to return some existing commits. This command introduces a new commit to reverse the effect of some previous faulty commit. This option does not move branch ref pointers to the faulty commit instead inverse the changes from that commit and create a new revert commit. In such a way, project history is maintained. But to execute this command your working tree should be clean. 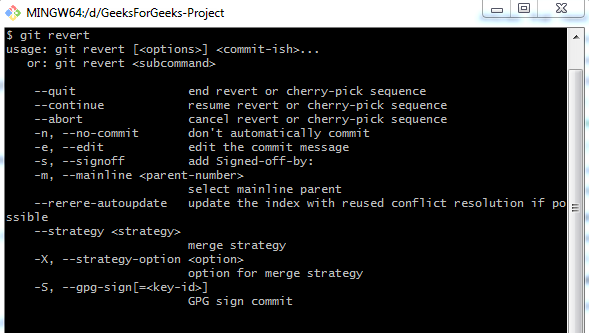 git reset: It resets current head to specified state. This git command is not commonly used to it’s restrictive use. It has three basic Option namely, –soft, –hard and –mixed.

git rm: This command is used to remove the tracked file from index or from working tree and git index. It cannot remove files just from working directory. The files removed must be identical to those in current head.

Summarizing: We have learnt that git revert is an safer option to undo changes as instead of deleting commit history. It creates a new commit that inverses the changes and git reset, on the other hand, it is a difficult option for undoing changes. The git rm is used to remove the file from the repository, so these are some of the most commonly used commands for undoing changes.

My Personal Notes arrow_drop_up
Previous
How to set CSS style to half of a character ?
Next
Largest and smallest digit of a number
Recommended Articles
Page :
Getting changes from a Git Repository
15, Jan 20
Difference between “git add -A” and “git add”
20, Jun 21
How to get history changes notification via history.pushState() method ?
27, Feb 20
How to see the changes in whole directory/folder containing many sass files ?
26, Apr 20
How to detect when an @Input() value changes in Angular?
28, Jul 20
3 big changes in GATE 2021
01, Aug 20
How to Make Changes to The Application Deployed on Heroku ?
22, Aug 20
How to make your page scroll to the top when route changes?
05, Mar 21
How to display warning before leaving the web page with unsaved changes using JavaScript ?
20, Nov 20
How to Clone Github Repository and Push Changes in Colaboratory?
09, Mar 21
How to call a function when content of a div changes using jQuery ?
23, May 21
How to Install, Configure and Use GIT on Ubuntu?
21, Sep 15
Introduction and Installation of Git
18, Apr 19
Git- Setting up a Repository
29, Apr 19
Saving a file in Git
11, Jun 19
Git- Debugging
15, Jul 19
Examining Git
15, Jul 19
Git - Changing History
15, Jul 19
Introduction to Git Branch
22, Aug 19
Git-Checkout And Merge
20, Sep 19
Git Features
05, Dec 19
Merge Strategies in Git
31, Dec 19
Git Workflow Etiquettes
08, Nov 21
Using Tags in Git
05, Jun 20
Article Contributed By :