These are used to determine success or failure of a person also to quantify the improvements in the software throughout its process. These metrics can be used to reinforce good OO programming technique which lead to more reliable code. Object-oriented software engineering metrics are units of measurement that are used to characterize: 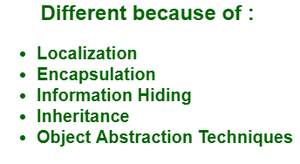 Localization : It is the process of placing items in close physical nearness to each other.

In object-oriented software , from the name suggests the localization is based on objects. This means:

Encapsulation : It is the packaging of a collection of items.

Information Hiding: It is the suppression or hiding of the objects.

It plays a direct role in such metrics as object coupling and the degree of information hiding.

Inheritance: It is mechanism where one object acquires the characteristics from one, or more , other objects.

There are many object-oriented software engineering metrics which are based on inheritance e.g.,

Abstraction: It is the mechanism where we focus only on important details of a concept, while ignoring the in essential details.

Classes: There are three commonly used views on the definition for “class”.