Object-Oriented Design (OOD): An analysis model created using object-oriented analysis is transformed by object-oriented design into a design model that works as a plan for software creation. OOD results in a design having several different levels of modularity i.e., The major system components are partitioned into subsystems (a system-level “modular”), and data manipulation operations are encapsulated into objects (a modular form that is the building block of an OO system.). In addition, OOD must specify some data organization of attributes and a procedural description of each operation. Shows a design pyramid for object-oriented systems. It is having the following four layers. 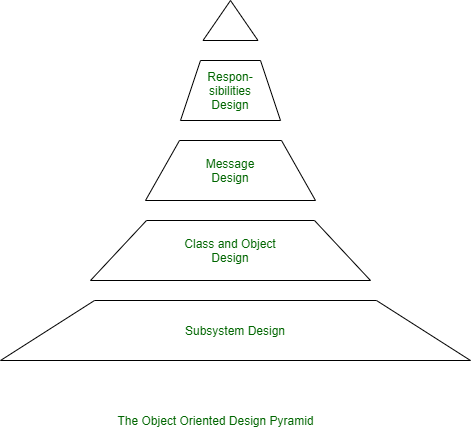 The Object-Oriented design pyramid specifically emphasizes specific product or system design. Note, however, that another design layer exists, which forms the base on which the pyramid rests. It focuses on the core layer the design of the domain object, which plays an important role in building the infrastructure for the Object-Oriented system by providing support for human/computer interface activities, task management.

Some of the terminologies that are often encountered while studying Object-Oriented Concepts include:

1. Attributes: a collection of data values that describe a class.

2. Class: encapsulates the data and procedural abstractions required to describe the content and behaviour of some real world entity. In  other words,  A class is a generalized description that describes the collection of similar objects.

3. Objects : instances of a specific class. Objects inherit a class’s attributes and operations.

4. Operations: also called methods and services, provide a representation of one of the behaviour of class.

5. Subclass: a specialization of the super class. A subclass can inherit both attributes and operations from a super class.

6. Superclass:  also called a base class, is a generalization of a set of classes that are related to it.