Negative transformation of an image using Python and OpenCV

Image is also known as a set of pixels. When we store an image in computers or digitally, it’s corresponding pixel values are stored. So, when we read an image to a variable using OpenCV in Python, the variable stores the pixel values of the image. When we try to negatively transform an image, the brightest areas are transformed into the darkest and the darkest areas are transformed into the brightest.

As we know, a color image stores 3 different channels. They are red, green and blue. That’s why color images are also known as RGB images. So, if we need a negative transformation of an image then we need to invert these 3 channels.

Let’s see 3 channels of a color image by plotting it in the histogram. 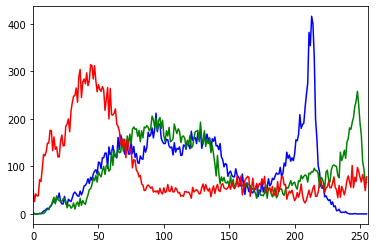 So, X-axis shows a total of 256 values (0 – 255) and Y-axis shows the total frequencies of each channel. As you can see in the histogram, the blue channel has the highest frequency and you can easily mark the amount of blue color present in the image by looking at it.

Negative transformation of the image