Many events are seen in the field of physics, yet some of them have eluded explanation for a long time. Newton proposed three rules of motion, which became known as Newton’s Laws of Motion. These laws were a novel finding in the physical universe, and they were frequently employed to explain situations that were before unexplainable. Newton’s three laws were utilized to establish a relationship between the motion of objects around us and the natural or external forces operating on them, as we all know.

A push or pull on an object that causes the body on which it works to accelerate is known as Force. The Newton (N) is the SI unit of force. A force can affect a body in three ways. It has the ability to change the speed of a body, the direction of motion of a body, and the shape of a body. Force is a vector quantity since it has both magnitude and direction. Also, force exists only as a result of a collision.

The force is no longer felt by the objects if there is no interaction. Similarly, inertia was utilized in conjunction with the first law of motion to describe physical phenomena. Before we look at what inertia is, it’s a good idea to review Newton’s first law:

According to Newton’s first law,

Unless and until an external force acts on a body, it remains at rest or in uniform motion along a straight line. 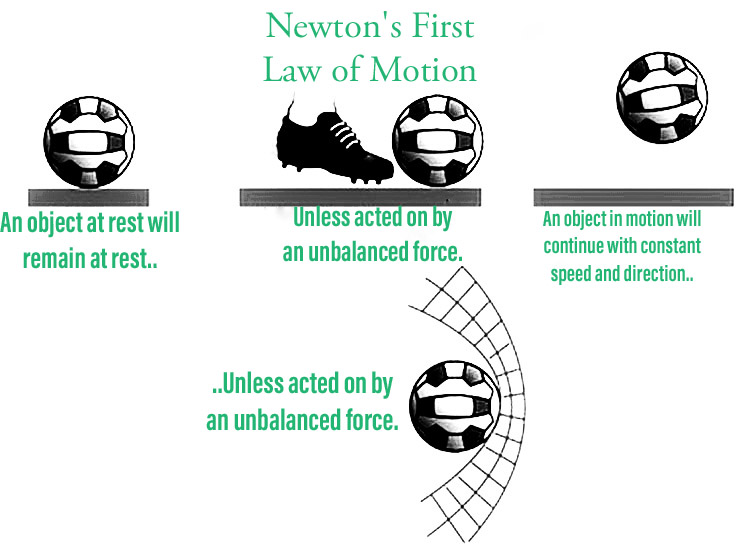 It is one of the fundamental quantities in Physics and the most basic property of matter. We can define mass as the measure of the amount of matter in a body.

A body’s mass does not alter over time. Only in exceptional circumstances, such as when a massive amount of energy is provided or taken from a body. Mass is a scalar quantity because it only has magnitude.

Kilogram (kg) is the SI unit of mass.

For instance, a nuclear reaction converts a small amount of matter into a large amount of energy, reducing the mass of the substance.

Galileo Galilei coined the term “inertia”. It was claimed that inertia is a body’s tendency to resist a change in its condition of rest or uniform motion. Inertia is the quality of objects that allows them to remain at rest or, if moving, to continue traveling in a straight line.

Inertia and mass are dependent upon each other. The mass is directly proportional to its inertia, the more the mass of the body more will be its inertia, and hence, more will be the force required to change its state of motion.

Some examples to learn inertia are:

There are three types of Inertia namely:

Let’s perform an activity to learn more about inertia as, 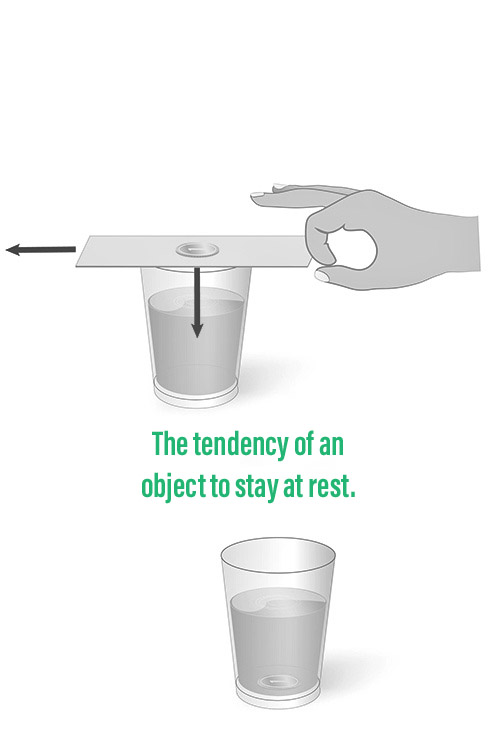 Real-life Examples of Experiencing Inertia are:

Because the lower half of our body is in contact with the ground, any forces operating on the bus’s base will be sensed by our lower half, which will react correspondingly. The upper half of our bodies, on the other hand, is not in contact with any portion of the vehicle. As a result, as the bus comes to a halt, the lower half of the body comes to a halt while the upper half continues to move, causing us to fall forward. We also tumble backwards when the bus suddenly starts.

This can occur as a result of rear-end collisions. When our vehicle gets hit from behind, we immediately tumble forward and come to a halt owing to the force of the impact. We soon fall forwards and backwards as a result of this. This happens in a matter of seconds and can result in serious head trauma. As a result, head restraints are used to offer cushion support.

Problem 1: Why does a ball rolling on the ground stop on its own if Newton’s first law holds true?

When a ball is rolling on the ground, it will come to a halt due to an uneven external force (friction, gravity, etc.) acting on the ball. “Unless and until an external force acts on a body, it remains at rest or in uniform motion along a straight line,” says the first law of motion. Friction acts as an external force in this scenario, causing the ball to stop on its own.

Inertia is a body’s tendency to resist a change in its condition of rest or uniform motion. Inertia is the quality of objects that allows them to remain at rest or, if moving, to continue traveling in a straight line.

Problem 3: Why do dust particles fly out when we hit the carpet with a stick?

Problem 4: What are the factors that influence inertia?

Inertia depends on mass of an object and force as:

Problem 5: Why is it recommended using a rope to secure any luggage on a bus’s roof?

The motion of a moving vehicle, such as a bus, is not uniform; the vehicle’s speed varies, and it may hit the brakes quickly or make a sharp turn. Due to inertia, the luggage will oppose any change in its state of rest, motion, or direction, and it will tend to fall sideways, forward, or backward. The luggage is secured with a rope to prevent it from falling.