LL(1) Parser algorithm:
Input- 1. stack = S  //stack initially contains only S.
2. input string = w$
where S is the start symbol of grammar, w is given string, and $ is used for the end of string.
3. PT is a parsing table of given grammar in the form of a matrix or 2D array.

Output- determines that given string can be produced by given grammar(parsing table) or not, if not then it produces an error.

Time complexity
As we know that size of a grammar for a language is finite. Like, a finite number of variables, terminals, and productions. If grammar is finite then its LL(1) parsing table is also finite of size O(V*T).  Let

l is very larger than p. if block at line 4 of algorithm always runs for O(1) time. else if block at line 12 in algorithm takes O(|P|*p) as upper bound for a single next input symbol. And while loop can run for more than l times, but we have considered the repeated while loop for a single next input symbol in O(|P|*p). So, the total time complexity is

The time complexity of this algorithm is the order of length of the input string.

Parsing table(PT) for this grammar

We have to add $ with this string,
We will use the above parsing algorithm, diagram for the process : 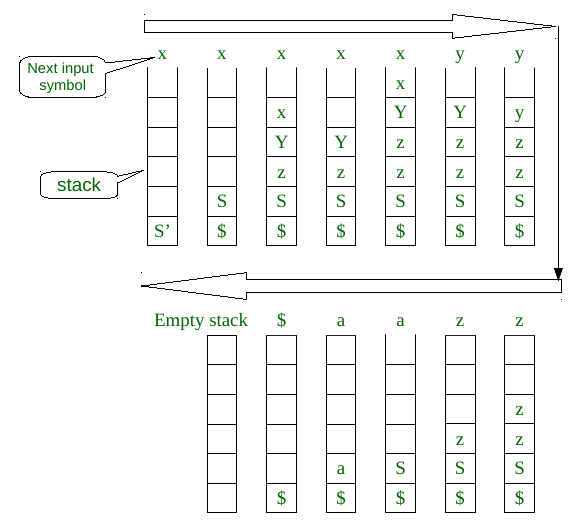 For string1 we got an empty stack, and while loop or algorithm terminated without error. So, string1 belongs to language for given grammar G.

Same way as above we will use the algorithm to parse the string2, here is the diagram 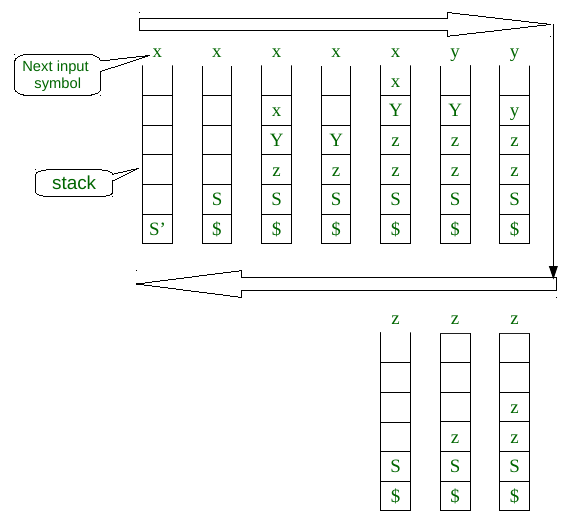 For string2, at the last stage as in the above diagram when the top of the stack is S and the next input symbol of the string is z, but in PT[S,z] = error. The algorithm terminated with an error. So, string2 is not in the language of grammar G.