Let’s understand first how many Package does GUI support:

Java was launched on 23-Jan-1996(JDK 1.0) and at that time it only supported CUI(Character User Interface) application. But in 1996 VB(Visual Basic) of Microsoft was preferred for GUI programming. So the Java developers in hurry(i.e within 7 days) have given the support for GUI from Operating System(OS). Now, the components like button,etc. were platform-dependent(i.e in each platform there will be different size, shape button). But they did the intersection of such components from all platforms and gave a small library which contains these intersections and it is available in AWT(Abstract Window Toolkit) technology but it doesn’t have advanced features like dialogue box, etc.

Now to run Applet, java needs a browser and at that time only “Internet Explorer” was there of Microsoft but Microsoft believes in monopoly. So “SUN Micro-System”(the company which developed Java) contracted with other company known as “Netscape”(which developed Java Script) and now the “Netscape” company is also known as “Mozilla Firefox” which we all know is a browser. Now, these two companies have developed a technology called “SWING” and the benefit is that the SWING components are produced by Java itself. Therefore now it is platform-independent as well as some additional features have also been added which were not in AWT technology. So we can say that SWING is much more advanced as compared to AWT technology.

What is Applet?
An applet is a Java program that can be embedded into a web page. It runs inside the web browser and works at client side. An applet is embedded in an HTML page using the APPLET or OBJECT tag and hosted on a web server.

Applets are used to make the web site more dynamic and entertaining.

Life cycle of an applet : 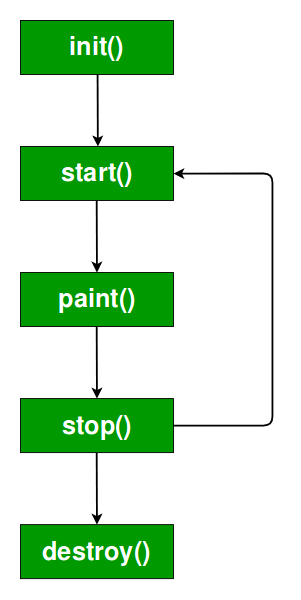 It is important to understand the order in which the various methods shown in the above image are called. When an applet begins, the following methods are called, in this sequence:

When an applet is terminated, the following sequence of method calls takes place:

Here we have created an object reference without creating its object but it still runs because it’s caller,i.e JVM will provide it with an object.

Let’s begin with the HelloWorld applet :

After you enter the source code for HelloWorld.java, compile in the same way that you have been compiling java programs(using javac command). However, running HelloWorld with the java command will generate an error because it is not an application.

There are two standard ways in which you can run an applet :

Each of these methods is described next.

To prove above mentioned point,i.e paint is called again and again.
To prove this, let’s first study what is “Status Bar” in Applet:
“Status Bar” is available in the left bottom window of an applet. To use the status bar and write something in it, we use method showStatus() whose prototype is
public void showStatus(String)
By default status bar shows “Applet Started”
By default background colour is white.

To prove paint() method is called again and again, here is the code:
Note:This code is with respect to Netbeans IDE.

Note:- Here we can see that if the screen is maximised or minimised we will get updated time. This shows that paint() is called again and again.

Features of Applets over HTML