Wi-Fi (Wireless Fidelity) is a group of wireless network protocols, in view of the IEEE 802.11 group of norms, which are ordinarily utilized for LANs (Local Area Network) and Internet access. Wi‑Fi is a brand name of the non-profit Wi-Fi Alliance, which confines the utilization of the term Wi-Fi Certified to items that effectively complete interoperability certification testing. Devices that can utilize Wi-Fi advances incorporate PCs, workstations, cell phones and tablets, TVs, printers, speakers, vehicles, etc.

Wi-Fi utilizes various parts of IEEE 802 protocol family and is intended to interwork flawlessly with its wired kin “Ethernet”. Viable gadgets can network through wireless passageways to one another just as to wired gadgets and Internet. Various adaptations of Wi-Fi are specified by different IEEE 802.11 protocol guidelines, with diverse radio advancements deciding radio bands, and the most extreme ranges, and speeds that might be accomplished.

Wi-Fi most generally utilizes the 2.4 gigahertz (120 mm) UHF and 5 gigahertz (60 mm) SHF ISM radio groups; these groups are partitioned into various channels. Channels can be shared between networks however just a single transmitter can locally send on a direct at any second in time.

Hardware regularly upholds different variants of Wi-Fi. For communicating, various devices must use a typical Wi-Fi form. Variants contrast between radio wavebands they work on, the radio bandwidth they possess, the most extreme information rates they can uphold, and different subtleties. A few renditions license utilization of various receiving wires, which grants more noteworthy speeds with diminished obstruction.

Generally, hardware has essentially recorded adaptations of Wi-Fi utilizing name of IEEE standard that it upholds. In 2018, Wi-Fi collusion normalized generational numbering so equipment can show that it underpins Wi-Fi 4 (if the hardware upholds 802.11n), Wi-Fi 5 (802.11ac), and Wi-Fi-6 (802.11ax).

Wi-Fi-6 :
Wi-Fi-6 is another wireless norm. Additionally called 802.11ax, it is ready to make large waves in network availability and client experience enhancements. The up and coming age of Wi-Fi standard is Wi-Fi-6, otherwise called 802.11ax, the most recent advance in an excursion of relentless development.

The standard expands on qualities of 802.11ac while including efficiency, adaptability, and versatility that permits new and existing networks to speed up and limit with cutting edge applications. IEEE proposed Wi-Fi-6 standard, so it can couple freedom and blazing fast speed of Gigabit Ethernet wireless with dependability and consistency found in authorized radio.

Benefits of Wi-Fi-6 :
Wi-Fi-6 permits enterprises and specialist organizations to help new and rising applications on a similar wireless LAN (WLAN) foundation while conveying a higher evaluation of administration to more established applications. This situation makes way for new plans of action and expanded Wi-Fi selection.

Are Wi-Fi-6 and 802.11ax different ?
No, they are equivalent. Wi-Fi Alliance began a mission to coin expression “Wi-Fi-6” when alluding to IEEE 802.11ax norm. It demonstrates that it is 6th era of Wi-Fi. The reason was to streamline showcasing message to enable 802.11ax to be better situated comparatively with Third Generation Partnership Project (3GPP) principles utilized in cellular (Example – 5G).

Approval of Wi-Fi-6 :
The IEEE-Standards Association is at present booked to confirm final IEEE Wi-Fi-6 correction in 2020. Notwithstanding, the Wi-Fi Alliance is relied upon to guarantee key features from amendment made in August 2019, with extra features (including 6GHz band) certified throughout following couple of years.

Advantages over other Wi-Fi standards :

Wi-Fi-6 will address high-traffic issues achieved by different standards and IoT devices endeavoring to connect with a network. Wi-Fi-6E is headway to everything with Wi-Fi-6 yet signifies that it supports an all-new 6GHz frequency.

Wi-Fi-6E can use up to 14 extra 80 MHz channels or 7 extra super-wide 160 MHz diverts in 6 GHz for applications, for example, high-quality video streaming and augmented reality. Wi-Fi-6E devices influence these wider channels and extra ability to convey more prominent network execution and backing more Wi-Fi clients immediately, even in extremely thick and clogged conditions. 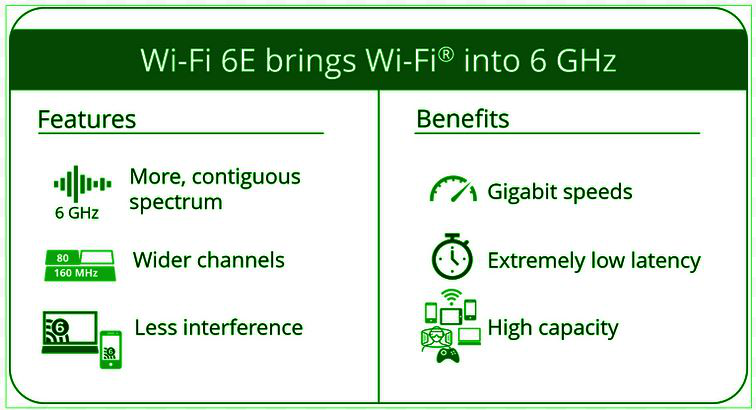 Advancement and Performance in Testing situations :
The omnipresence of Wi-Fi and it’s capacity to supplement different wireless innovations bring guarantee of associating everybody and everything, all over, closer to real world. Wi-Fi fame has likewise made extremely assorted and thickly populated Wi-Fi conditions, requiring innovative advances to address issues of clients. Wi-Fi CERTIFIED 6 conveys enhancements and new features that empower Wi-Fi devices to work efficiently in densest and dynamic network settings.

Wi-Fi-6 would now be able to separate a wireless channel into an enormous number of subchannels. Each of these subchannels can convey information planned for an alternate device. This is accomplished through something many refer to as Orthogonal Frequency Division Multiple Access, or OFDMA. Thus, Wi-Fi APs can converse with more gadgets without a moment’s delay.

This new standard likewise has improved MIMO—Multiple In/Multiple Out. This includes numerous antennas, which let APs converse with different devices immediately. With Wi-Fi 5, access points could converse with devices simultaneously, yet those gadgets couldn’t react simultaneously. Wi-Fi-6 has an improved adaptation of multi-user or MU-MIMO that lets gadgets react to wireless APs simultaneously.

Wireless APs close to one another might be communicating on a similar channel. For this situation, the radio tunes in and sits tight for a reasonable sign before answering. With Wi-Fi-6, wireless access points close to one another can be configured to have a distinctive Basic Service Set (BSS). This “color” is only a number somewhere in range of 0 and 7. On the off chance that a device is checking whether channel is all reasonable and tunes in, it might see a transmission with a feeble sign and an alternate “color”. It would then be able to disregard this flag and communicate at any rate without pausing, so this will improve execution in congested zones, and is likewise called “spatial frequency re-use.”

These are only absolute most fascinating things, yet new WI-Fi standard additionally incorporates numerous upgrades. Wi-Fi-6 will likewise incorporate improved beamforming, for instance.