In this article, we will learn the process of communicating between the Django Backend and React js frontend using the Django REST Framework. For the sake of a better understanding of the concept, we will be building a Simple Task Manager and go through the primary concepts for this type of integration between React js and Django.

Reactjs in a nutshell is a Javascript library for developing Single Page Applications(SPA) with very detailed and well-structured documentation. For this project, React will serve as the Frontend, handling the User Interface(UI) through the Request to Django’s backend.

Let’s take a look first at what we will be building. The below images shows the UI of the Task Manager.

This task manager application is a sort of to-do list. Here we will have three buttons as “Completed”, “Incomplete” and a button to add the task named “Add task” as shown in the above image.

In order to add a task, you click on the Add task button which will open up a window within the app to add the task as shown below. Here we can add the “Title” for the task and give it a description inside the “Description” section. Finally, you can check or uncheck depending upon the status of the task(ie, Completed or Incomplete) as shown in the below image:

After you “Save” the task, you can navigate between the Completed and Incomplete tabs to keep track of the tasks as shown below:

Here you will also have the option to “Delete” or “Edit” and existing task as shown below:

All of the operations performed above are managed by the Django REST Framework.

So the following are the prerequisites for the project:

To verify if you have python 3 installed, use the following command in your command prompt( Since this project is developed on a Windows machine, we will be using the command prompt but depending upon your operating system you can use the terminal):

This will show up the current python version on your system as shown below:

To check if the Node module is installed, use the below command:

This will show you the node version on your system as shown below:

At this point, we are good to go as we have Python and Node js installed in our system.

Let’s start with the Backend.

Now let’s open up our command prompt. Now follow the below steps in the same order to follow along with this article.

Step 1: Create a directory named “Django-react-app” using the below command(the command may change slightly depending upon your OS):

Step 2: Moved into the directory that we just created using the below command:

Step 3: Now create a virtual environment using the below command:

We have named our virtual environment “dar”, short for Django and react. This is necessary as we don’t have to install packages and dependencies globally. It is also a good programming practice.

Step 4: Activate the virtual environment that we just created using the below command:

This will activate our virtual machine as shown below:

Step 5: Now install Django inside the virtual machine using the below command:

You will get a similar message as your installation gets completed:

Step 6: Now let’s create our project named “backend” for our Django backend. To do so use the below command:

The Django-react app will be our main folder and inside it, we will have two folders, one for the backend and one for the frontend that we will create later.

Step 7: Now navigate to the backend folder using the below command:

Step 8: Now we will start our app and call it “todo” using the below command:

The app gets created using the above command as shown below:

Now let’s go ahead and start up the VS code and open the project folder inside it. At this stage our project structure will look like below: 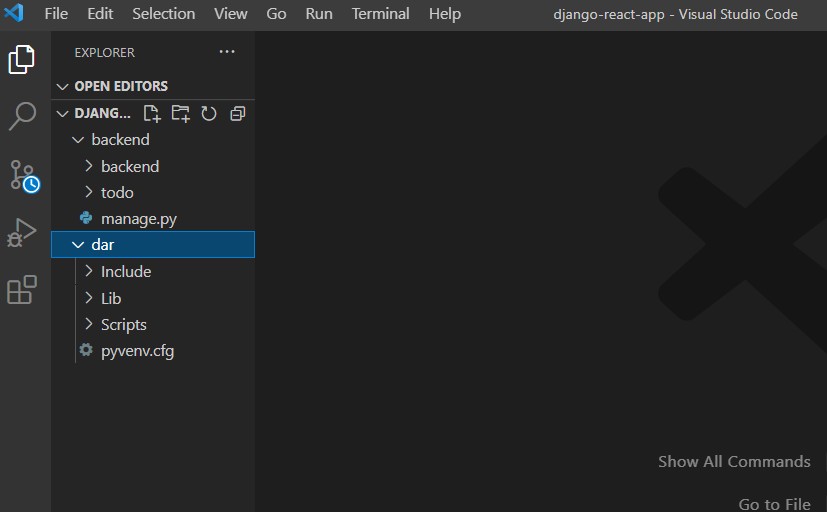 Step 9: Now use the below command to migrate the project:

The migrations will be applied as shown below: 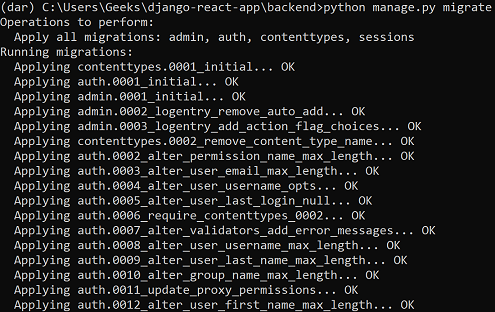 Step 10: Now let’s run the server using the below command:

Now you can visit the local host to check if the project has started properly. As you can see in the below image the project is up and running: 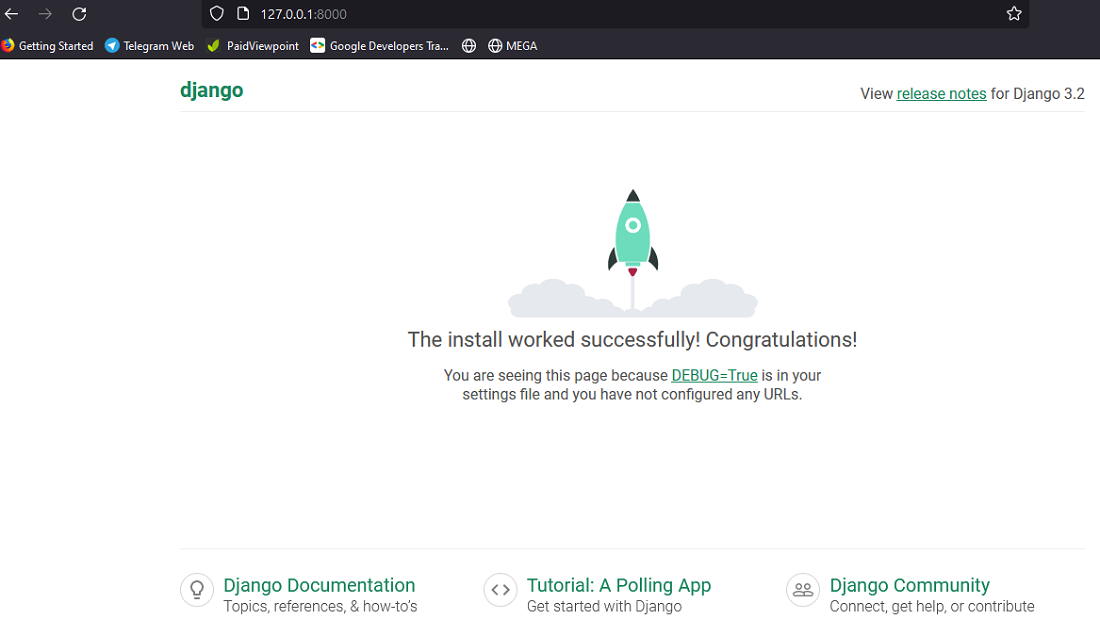 Step 11: Now we need to take some configuration steps inside the settings.py file. In the INSTALLED_APPS section add the name of the app that we created (ie, todo) as shown below:

At this point, the settings.py file would look like below:

Step 12: Next, we will need to create a Model. The Model will determine how the to-do items are stored in the database. We will have three properties in the model:

So go ahead and open the models.py file and the following code:

We will also create a string representation of the title inside the Todo class as follows:

At this point, our models.py file will look like this:

The following message will be generated when your migration is ready:

Step 14: Now let’s apply all migrations using the below command:

This will apply our migrations as shown below:

Now we can test to see that the CRUD operations work on the todo model file using the Admin site (or, the interface). For this, we will need to register the models in the admin.py file.

Step 15: Open up the admin.py file and add up the following code in it:

Step 16: Now let’s create a superuser using the below command:

Here we will be using the following credentials:

Note: You can set up your credentials as per your need. The above credentials need not be the same.

We would get the following message when the superuser gets created:

Step 17: Now let’s run the server and check everything is going as intended so far using the below command:

Navigate to the following link:

This will show us the admin page as shown below:

Here fill up your credentials and log in. We will use the credentials that we used while creating the superuser: 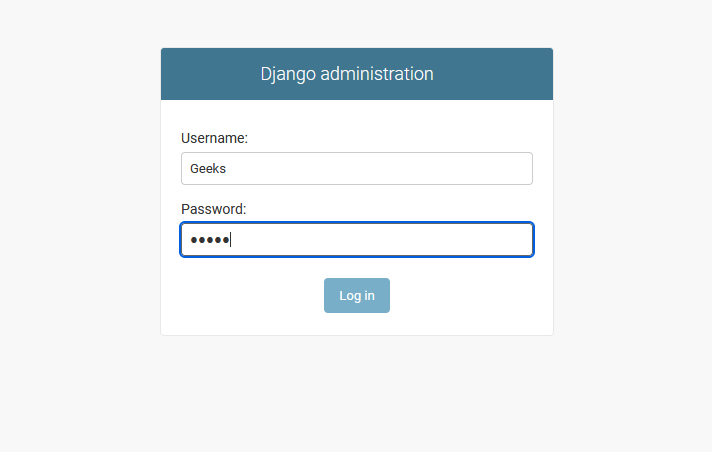 This will lead us to the following page. Here we can see our users, the app, and the groups as shown below:

Let’s add some task to it and save it as shown below:

We can see this task listed on the todo section as shown below:

To create the API we will need to install the Django REST Framework for Serializers. We also need Django-cors-headers for whitelisting port 3000, which is the default port for React.

Now follow the below steps to create the Django REST framework:

Step 1:  To install the Django REST framework use the below command in the backend directory:

Step 2: Now install the Django-cors-headers using the below command:

Step 3: Now open up the setting.py file and add both the dependencies that we just installed to INSTALLED_APPS as shown below:

Step 4: Also in the settings.py file we need to whitelist the localhost port 3000. If we don’t do that there will be a block between the localhost:8000 and localhost:3000. Add the following code to achieve the same:

Step 5: In the MIDDLEWARE section we need to add the cors-headers settings as shown below:

At this point, our settings.py would look like below:

Now we need to create the Serializers for the Todo data Model. The Serializers are responsible for converting model instances to JSON. This will help the frontend to work with the received data easily. JSON is the standard for data interchange on the web.

Step 6: Now create a file inside the todo folder and name it serializers.py. Inside the folder add the following code:

Step 7: Now it’s time to create the Views. So open up the views.py file. Now add the following code to the file:

Step 8: Now open up the urls.py file and add the following code to it.

This is the final step for creating the REST API and we can now perform all CRUD operations. Routers allow us to make queries. For example, if we go the “tasks”, this will return the list of all the tasks. Also, you can have a single ‘task’ with an id to return a single task, where id is the primary key.

Now let’s check if we are moving forward in the right direction. So run the server and navigate to the following URL:

If everything is good, we will get the following outcome:

As you can see our API is up and running.

Now if we navigate to the following links we can view and interact with our tasks: 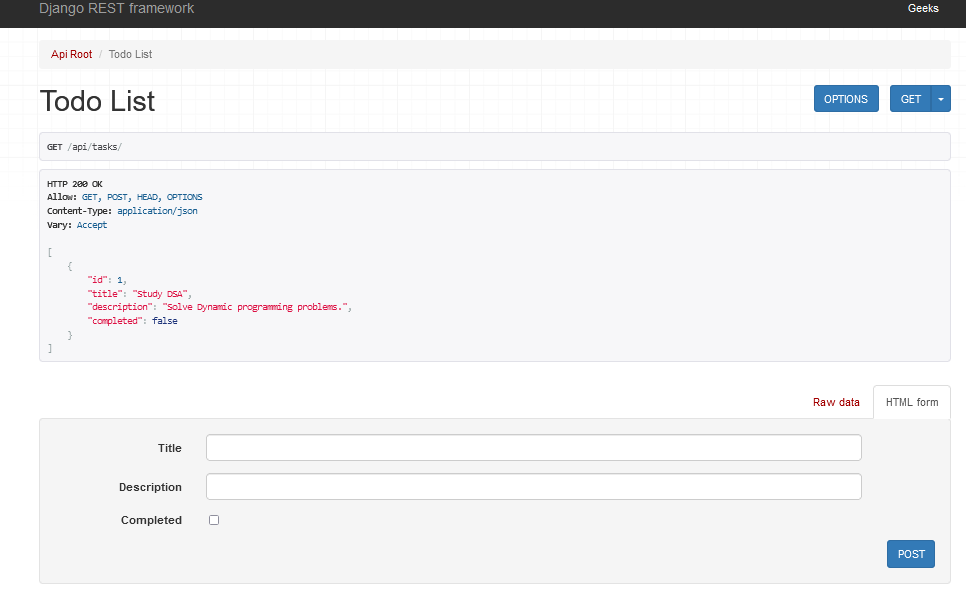 Now let’s build the frontend for our Todo app. For this follow the below steps:

Step 1: Navigate to the main project directory(ie, Django-react-app) and activate the virtual environment using the below command:

Step 2: Now use the below command to create a boilerplate of React js app:

Here, npx stands for Node Package Executable. After the boilerplate is setup you will get the following message: 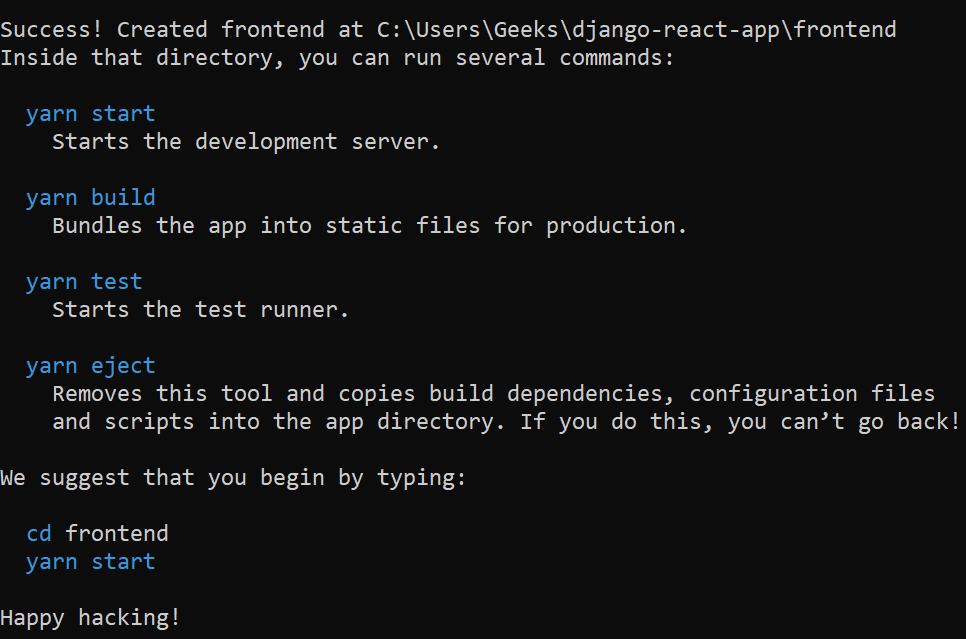 We will be also needing some UI flair for the UI design, specifically reactstrap and bootstrap.

Step 3: So, use the below command to install reactstrap and bootstrap in the project:

Step 4: First move into the Frontend folder and use the below command to run the React server to make sure everything if working till this point:

If everything is fine, you’ll get the following page on the localhost:3000 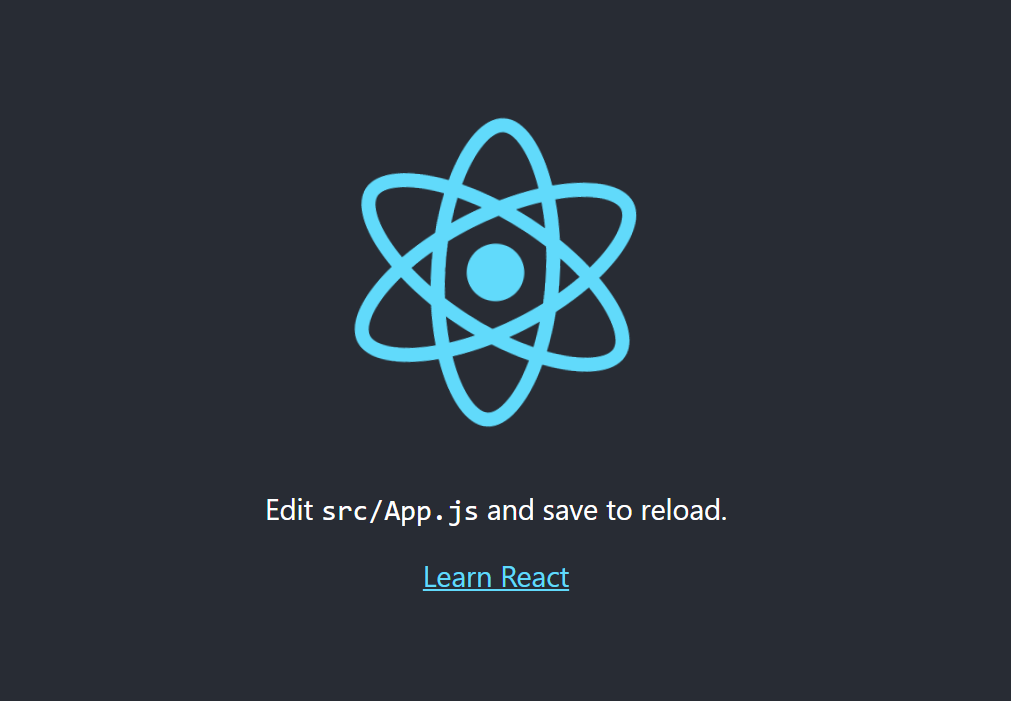 Step 5: Now open up the App.js file in the frontend folder. And clear the boilerplate code and change it to the below code:

At this point the frontend will look like below:

As you can see in the above image. Any changes made to the App.js file are reflected directly to the UI.

Step 6: Now the code to the App.js file. Comments are added to the code for better understanding.

Step 7: Now open up the Index.css file, clear the CSS inside it and add the following CSS in the file:

Step 8: Now create a new folder named “Components” in the src directory and add a file Modal.js to it. Then add the following code to it.

Step 10: Make the changes to the index.js file as follows:

For us to make requests to the API endpoints on the backend server of Django, we will need to install Axios. Use the following command inside the frontend folder to install Axios:

Congratulation!!. At this point, you have successfully build a Fullstack Django-React app and Used the Django REST framework to establish communication between the frontend and backend.