How to Use the Timeline in Animate?

Flash is one of the best animation software choices for beginners as well as for professionals as it has great potential and is used in the creation of games, interactive webpages, animations, presentations, and much more. It has a simple interface that is totally customizable according to the preference of users. It also includes the functionality of coding with Actionscript 3.0 along with vector animation. There are different versions of the flash available but all of them have the same basic functionalities, in new versions even it is easier to animate as it gives camera properties also.

A timeline can be understood as the controller of the animation as it is used for controlling the speed, ease, effects, and properties of the animation. It consists of several components which are used for different functionalities while creating animation whether frame by frame or by using tweening. It is actually a package of a number of components with different functionalities to provide ease in the animation process. Timeline is helpful in the frame by frame animation to check current, previous, and next frame for the artwork made on these frames.

Following are the components of the timeline:

Let’s discuss each component in detail:

Frames are represented by white and grey rectangular boxes on the timeline, these frames can be used to provide ease for animation and each frame is like a sheet that can be used to draw something. Numbering is given on the top of frames by using these numbering animations can be made in 24 frames per second or in 30 frames per second. Frames can be inserted and deleted using F5 and Shift F5 respectively.

Layers are another component that controls the elements of any scene say background and foreground, one can arrange artwork in the form of layers as a stack of components that can be manipulated easily. Layers can be added or deleted using two buttons on the bottom of the timeline. There is no limit in adding layers even layers can be grouped in folders also.

Play button is used to play the animation and animation is used frame by frame to create a motion effect. The speed of animation can be adjusted by using frame rate. With the play and pause button move left or move right button is also given which will move the frame pointer one frame forward and one frame backward. The other two buttons are for moving the pointer to the first frame and to the last frame. The play button acts as a pause button also when animation gets played so to stop animation use the play button.

Loop control is used to play the animation in an infinite loop until the pause button is pressed. It is helpful in check the flow and smoothness of the animation. It is also used in animation which includes cycles like the rotation of wheels of any vehicle. How much part of the animation should loop can also be controlled by using these loop pointers above the frame numbering those can be stretched from both ends to control the part which is used for looping.

Onion skin is used to see the previous or next drawing so to make the animation precisely as without any reference it would be much difficult for the animator to draw the animations so this feature provides a lot of help to draw the next figure or to fill in between the animation. In the below figure onion skin is on and the pointers above frame numbers can be used to apply onion skin to the desired part. In this figure frame 1 and frame 6 has drawings but to fill frame 3 onion skin is being used. 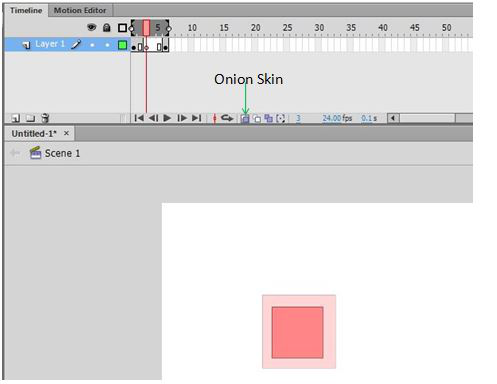 Let’s create an animation of one second for that 24 frames on the timeline will be used, out of which 7 will be keyframes to draw animation on each keyframe.

Step 1: Draw a circle(ball) on the stage on frame 1, it is our keyframe.

Step 2: Leave 3 frames and go to the 5th frame and enter a keyframe and change the position of the ball to downward by using onion skin given on the timeline.

Step 3: Again leave 3 frames and go to 9th frame and enter a keyframe and change the position of the ball to downward by using onion skin given on the timeline.

Step 4: Again leave 3 frames and go to 13th frame and enter a keyframe and change the position of the ball to downward by using onion skin given on the timeline.

Step 5: Again leave 3 frames and go to 17th frame and enter a keyframe and change the position of the ball to downward by using onion skin given on the timeline.

Step 6: Again leave 3 frames and go to 21st frame and enter a keyframe and squeeze the ball using transform tool.

Step 7: Now leave 2 frames and go to 24th frame and squeeze the ball a little more.

Step 8: Click on the play button below the timeline to see the animation.