How to Solve java.lang.IllegalStateException in Java main Thread?

An unexpected, unwanted event that disturbed the normal flow of a program is called Exception.

Most of the time exception is caused by our program and these are recoverable. Example: If our program requirement is to read data from the remote file locating in U.S.A. At runtime, if a remote file is not available then we will get RuntimeException saying fileNotFoundException.  If fileNotFoundException occurs we can provide the local file to the program to read and continue the rest of the program normally.

There are mainly two types of exception  in java as follows:

The exception which is checked by the compiler for the smooth execution of the program at runtime is called a checked exception. In our program, if there is a chance of rising checked exception then compulsory we should handle that checked exception (either by try-catch or throws keyword) otherwise we will get compile-time error.

The exceptions which are not checked by the compiler, whether programmer handling or not such type of exception are called an unchecked exception.

Whether the exception is checked or unchecked every exception occurs at run time only if there is no chance of occurring any exception at compile time.

IllegalStateException is the child class of RuntimeException and hence it is an unchecked exception. This exception is rise explicitly by programmer or by the API developer to indicate that a method has been invoked at the wrong time. Generally, this method is used to indicate a method is called at an illegal or inappropriate time.

Example: After starting a thread we are not allowed to restart the same thread once again otherwise we will get Runtime Exception saying IllegalStateException. 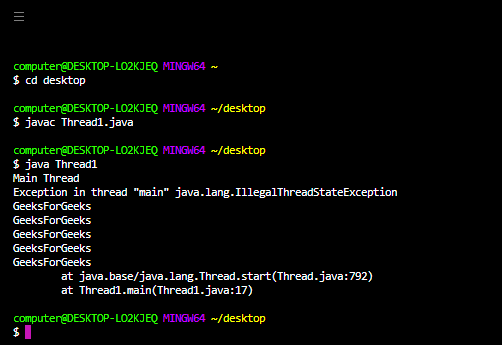 Example 2: We call start() method on a thread when it has finished executing run() method. 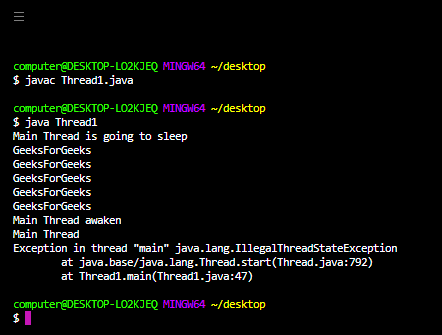 How to solve this error?

In order to avoid java.lang.IllegalStateException in Java main Thread we must ensure that any method in our code cannot be called at an illegal or an inappropriate time. 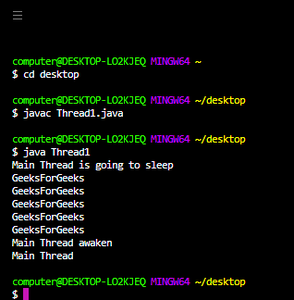 My Personal Notes arrow_drop_up
Next
Main thread in Java
Recommended Articles
Page :
Why Thread.stop(), Thread.suspend(), and Thread.resume() Methods are Deprecated After JDK 1.1 Version?
11, Jul 21
Java main() Method - public static void main(String[] args)
21, Jan 19
Main thread in Java
17, May 17
Does JVM create object of Main class (the class with main())?
06, Apr 16
Naming a thread and fetching name of current thread in Java
05, Apr 17
Difference between Thread.start() and Thread.run() in Java
23, Jan 19
Why java.lang.VerifyError Occurs in Java and How to Solve this?
19, Feb 21
How to Solve java.lang.ClassNotFoundException in Java?
23, Mar 21
How to Solve java.lang.NoSuchMethodError in Java?
25, Jul 21
Java.lang.Thread Class in Java
26, May 17
GFact 48 | Overloading main() in Java
11, May 16
Is main method compulsory in Java?
18, May 17
Replacing 'public' with 'private' in "main" in Java
21, Aug 18
Understanding "static" in "public static void main" in Java
10, Sep 18
Static Block and main() method in Java
20, Dec 18
Execute main() multiple times without using any other function or condition or recursion in Java
03, Jan 19
How to overload and override main method in Java
05, Apr 19
What are the main differences between the Java platform and other platforms?
07, Aug 19
In Java, Can we call the main() method of a class from another class?
28, Nov 19
Java Program to Print any Statement without Using the Main Method
16, Nov 20
Main Components of Java Netbeans IDE
04, Mar 21
Four Main Object Oriented Programming Concepts of Java
12, Aug 21
Can We Have Multiple Main Methods in Java?
29, Jul 21
Valid variants of main() in Java
07, Apr 16
Article Contributed By :