How to Separate a Mixture of a Solid and a Liquid?

In our daily life, we use different products. And, always keep in search of pure products as mostly also found written on the packaging of items. But scientifically the term pure is used for those matters which are made up of particles that have the same chemical nature or formation. Hence, the majority of substances surrounding us are mixtures of two or more constituent particles. Anything that has mass and occupies space made up of small tiny particles is called matter. As the mixture consists of different constituents, these constituents can be separated with the help of some physical methods like handpicking, weaving, sedimentation, etc.

In the article, we focused on the methods of separation used to separate the constituents from a mixture of a solid and liquid. The methods include the process of sedimentation, filtration, crystallization, and evaporation in which solid can be obtained separately in a dry state as well as liquid in its pure form.

The combination of two or more different kinds of particles is called a mixture. These particles do not show any kind of chemical reaction with each other but are physically bonded.

The result of the combination of components does not lose their uniqueness, nor are they chemically merged. A mixture is the final result of mechanically blending or combining chemical components such as elements and compounds. Mixtures are made up of two or more unrelated compounds that have not been chemically mixed. The following are the properties of mixtures.

Separation of Mixture of Solid and Liquid

A mixture of solid and liquid can be found in a homogeneous solution or heterogeneous mixture. The liquid in which the solid substance is mixed or gets dissolved is known as a solvent. Whereas, the dissolving solid constituent is known as solute. These solute and solvents can be separated in their pure form by the usage of different techniques for the separation of mixtures.

Some common methods to separate solid and liquid from a mixture are mentioned below:

Evaporation is the method of separating a solid (solute) from a homogeneous solution. in this method, the solution is heated until the solvent gets evaporated in the form of vapor and the solute is left behind as residue. The process involves the technique of vaporization. 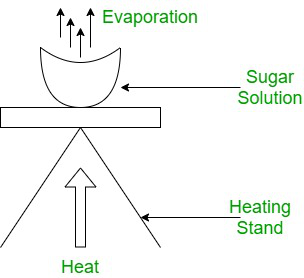 The process of evaporation

Here, the water is separated in the form of vapor and solid is obtained in the dry state. 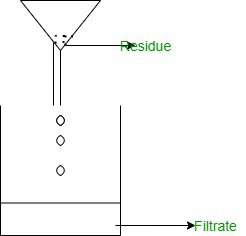 The Process of Filtration

For example, we can filter insoluble solid particles from a mixture of sand and water with the help of filter paper. The clear water received in the beaker is called filtrate and the solid particles which remain are called the residue.

It is the process in which heavy solid particles of the mixture get settled down at the bottom of the container while clear water gets separated.

A simple experiment may be used to study the sedimentation process. Fill a jar halfway with garden type mud, add some water, shake vigorously, and leave it alone for a few minutes. After a period, the gravel and rocks have settled below, stand above, and so on. Essentially, the garden variety mud has produced soil layers based on various.

Crystallization is the process of separating a solid from a liquid solution. This process is carried out by cooling highly concentrated solutions.

Crystallization is generally used to obtain the pure form or crystal of any substance. In the process, crystals are extracted from a supersaturated solution, and the liquid left behind is termed as mother liquor. Crystallization is the process by which the atoms or molecules of a substance organise themselves in a well-defined three-dimensional lattice, reducing the total energy of the system. When a material is crystallised, its atoms or molecules link together at well-defined angles. 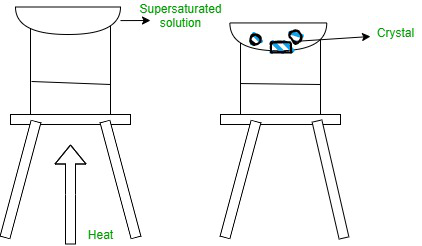 The Process of Crystallization

Problem 1: Can a heterogeneous mixture be the solution?

A solution consists of soluble solute uniformly distributed in it and cannot be seen through naked eyes. Whereas, in a heterogeneous mixture, there is no uniform composition.

Problem 2: What would you consider seawater a homogeneous or heterogeneous mixture?

As we know that seawater consists of salt that can only be removed by the process of evaporation whereas, seawater also contains sand and dead or decaying bodies which makes it a heterogeneous mixture.

Problem 3: Which is more preferential evaporation of crystallization?

The crystallization process is preferred over evaporation because of the following reasons:

Problem 5. How would you know that the given liquid is pure water?

Ans. We can find out by the process of evaporation as allow the liquid to evaporate and if there’s no residue left behind then, the liquid is pure.

Problem 6. Are all the materials present around us pure?

Ans. No, a pure substance is a substance that contains the same kind of particles. And, most of the things found around us consists of two or more kind of components.

Problem 7. Is the solution always found in a liquid state?

No, the solution is found in solid, liquid as well as gaseous states. As air is an example of gaseous solution and alloy is a solution found in a solid-state.

My Personal Notes arrow_drop_up
Previous
Top 50 Dynamic Programming Coding Problems for Interviews
Next
Write the numbers whose multiplicative inverses are the numbers themselves
Recommended Articles
Page :
How to separate a Mixture of Two Solids?
01, Sep 21
Liquid State of Matter
27, Nov 21
What is a Mixture? - Definition, Types, Properties, Examples
01, Sep 21
Class 8 NCERT Solutions - Chapter 10 Visualising Solid Shapes - Exercise 10.1
14, Nov 20
Class 8 NCERT Solutions - Chapter 10 Visualising Solid Shapes - Exercise 10.3
19, Nov 20
Class 8 NCERT Solutions- Chapter 10 Visualising Solid Shapes - Exercise 10.2
07, Jan 21
Visualizing Solid Shapes
07, Feb 21
Mapping Space Around Us - Visualizing Solid Shapes | Class 8 Maths
07, Feb 21
How to separate date and time in R ?
27, Jun 21
Why are elementwise additions much faster in separate loops than in a combined loop?
25, Oct 18
How to keep compiled files in a separate directory ?
26, Apr 20
How to Separate Cream from milk?
01, Sep 21
Java Program to Separate the Individual Characters from a String
02, Jan 21
Read multiple CSV files into separate DataFrames in Python
25, Mar 21
Shell Script to Separate Colon From the Given Input
15, May 21
If tan A = 5 and tan B = 4, then find the value of tan(A - B) and tan(A + B)
18, Oct 21
Difference between node.js require and ES6 import and export
26, Mar 20
SQL Full Outer Join Using Left and Right Outer Join and Union Clause
19, Apr 21
Simplify 7x2(3x – 9) + 3 and find its values for x = 4 and x = 6
11, Oct 21
How to select and upload multiple files with HTML and PHP, using HTTP POST?
03, May 19
What are the differences and Similarities Between Lumen and Laravel?
23, Oct 19
Getting the current date and time with timestamp in local and other timezones in Golang
08, Jun 20
Python - Move and overwrite files and folders
14, May 21
Class 9 RD Sharma Solutions - Chapter 18 Surface Area and Volume of a Cuboid and Cube - Exercise 18.2 | Set 2
02, Feb 21
Article Contributed By :