Imagine an apple with a bite taken out…

Now some fairytale enthusiasts (who don’t use phones!) might think this denotes Snow White but the majority of you will instantly recognize this as the Apple logo. That’s how popular Apple really is (And across the world!!!)

Now, in case the aforementioned fairytale enthusiasts have never heard of Apple, it is a very famous hardware and software company based in California that is known for it’s uniquely designed products such as the iPhone, iPad, iPod, Mac PC, etc. as well as its online services such as iTunes Store, iOS App Store, etc. (you get it…all the i’s!!!)

And Apple has recently made history (Yet Again!) by becoming the World’s First $1 Trillion Company on August 2, 2018. And if you are having trouble comprehending this amount, it’s 5 percent of the total GDP of the United States in 2018 (That puts things in perspective!!!)

This article primarily focuses on the reasons why Apple is so insanely successful and tries to answer the all-important question “How did Apple become the World’s First $1 Trillion Company?”. So let’s focus on that now! 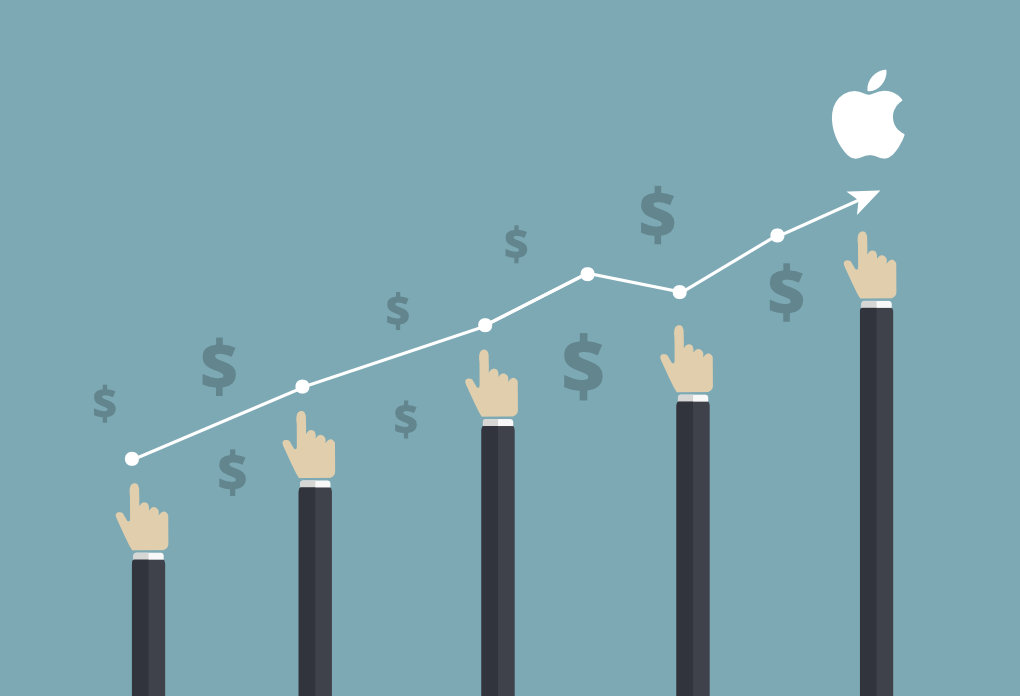 Apple had a long road to travel in order to achieve this milestone. And the turning point was the iPhone. It was launched on June 29, 2007, and it revolutionized mobile communication (from a keypad to a touch screen!!!). Apple’s market value increased from $72 billion to $173 billion that year. After that, Apple continued launching landmark products such as the iPad, the Apple Watch, etc. that eventually led to the astounding market value of $1 Trillion in 2018 (and Apple has never looked back since!).

Here is an image that demonstrates this meteoric rise of Apple from a net worth of $5 billion in 2000 to the historic $1 Trillion in 2018.

You will find more infographics at Statista.

Now, let’s focus a little more closely on the reasons that make Apple such a success story!

Why is Apple so Successful?

According to Steve Jobs “Everything is important- but success is in the details.” And that sums up the mantra that Apple has lived by. However, just in case you want the details, here are some of the reasons (in detail!) why Apple is so successful.

Steve Jobs was the chairman, chief executive officer, and co-founder of Apple Inc. and his name is synonymous with Apple now (as much as Newton’s is!). He was largely responsible for saving the sinking ship that was Apple in 1997 and subsequently the main force behind new products created after 1997, with the “Think different” advertising campaign that contained the iMac, iTunes, Apple Store, iPod, iPhone, App Store, and the iPad (Basically all the famous Apple products you’ve heard of!).

Such was the impact of Steve Jobs that when he died in 2011 of Pancreatic cancer, US President Barack Obama stated that:

Steve was among the greatest of American innovators – brave enough to think differently, bold enough to believe he could change the world, and talented enough to do it.

2. Rise of the iPhone

The release of the iPhone in 2007 was what lead to the meteoric rise of Apple that culminated in historic market value of $1 Trillion. The iPhone single-handedly changed the mobile communication landscape and created a nationwide sensation. Almost 1.4 million iPhones were sold in the first year they were on the market and that number has only increased. In fact, such was the popularity of the iPhone that Time magazine declared it the Invention of the Year for 2007.

According to Tim Cook, CEO of Apple Inc:

I think the iPhone is the best consumer product ever. That’s what I feel about it. And it’s become so integrated and integral to our lives, you wouldn’t think about leaving home without it.

And that is indeed true for a lot of us!!!

It would hardly be an exaggeration to state that Apple’s success depends mainly on its fluid and dynamic business plan. This can be observed by the trajectory that Apple’s graph has taken. Initially, they were just a computer company like many other’s but Steve Jobs studied the market to understand what the customers wanted (And that’s a tough job!).

Get closer than ever to your customers. So close that you tell them what they need well before they realize it themselves.”

This meant that Apple grew out from it’s “just a computer company” phase and introduced a wide variety of products such as MP3 players, mobile phones, tablet computers, watches, digital assistants, etc. This was officially cemented when Steve Jobs announced in 2007 that Apple Computer, Inc. would thereafter be known as “Apple Inc.”, as the company had shifted its emphasis from computers to consumer electronics.

Ever been to an Apple Retail Store? Well, they are phenomenal with their wide open spaces, touch-sensitive tables for products, video screens for product marketing and ceiling length light boxes. These retail stores were created to provide top-notch retail experience and customer service. According to Steve Jobs:

Apple stores are intended not just to move boxes, but to enrich lives.

And this strategy worked remarkably!!! According to current estimates, Apple has opened 506 retail stores across 24 countries, including 272 in the United States and 234 elsewhere, since May 2001 when they first started.

My Personal Notes arrow_drop_up
Previous
Career Paths For Software Developers and Programmers in 2019
Next
Blockchain - Into the Future
Recommended Articles
Page :
Difference Between a Product Based Company and Service Based Company
20, Jul 20
How Did Facebook Remove 2.2 Billion Fake Accounts in the First Quarter of 2019?
14, Aug 19
How does the Google's "Did you mean" Algorithm work?
27, Sep 22
Apple SDE Sheet: Interview Questions and Answers
24, Aug 22
Things every final year student should do to get a job in their dream company
29, Oct 18
GeeksforGeeks Complete Interview Preparation Course - Get a Job in your Dream Company!
29, Jun 20
Does Company Culture Matter in a Software Engineer Job?
23, Nov 20
Prepare For Your Dream Company With Coding Round Contests Test Series - FREE!
26, Nov 20
Must Do Coding Questions Company-wise
07, Oct 20
How To Switch From A Service-Based To A Product-Based Company?
30, Jun 22
Learn with GeeksforGeeks Course - Best Courses To Land Job In Your Dream Company
28, Jul 22
How Interview Experiences Can Help You Ace FAANG Company Interviews?
20, Aug 22
How to Become a Google Certified Android Developer?
07, Jun 21
How to become a Freelance Developer
22, Mar 19
How to Become a Full Stack Web Developer in 2019 : A Complete Guide
02, Jun 19
How to Become a Data Analyst in 2019: A Complete Guide
30, Sep 19
How to Become a Data Scientist in 2019: A Complete Guide
08, Oct 19
How To Become A Software Engineer?
07, Nov 19
How to Become a Full Stack Web Developer in 2021?
12, Feb 20
How to Become a Network Engineer?
27, Feb 20
Why You Should Become a Self-Taught Programmer?
04, Mar 20
Become Leader of Coding Era - GeeksforGeeks Campus Ambassador Program
20, Mar 20
How to Become a Freelance Programmer in 2020?
30, Apr 20
Will Julia Become the Empress of the Artificial Intelligence World?
15, May 20
Article Contributed By :