How can Artificial Intelligence Impact Cyber Security in the Future?

What are the most important apps on your smartphone? Maybe it is your bank app? Or even your Gmail account? Whatever important app it is, chances are it is password protected or secured in multiple ways. This cybersecurity becomes even more important in a professional setting where your company account has multiple barriers such as antivirus, password protection, etc. These are all elements of cybersecurity that are extremely necessary to secure both your personal and professional accounts from malicious users and hackers. 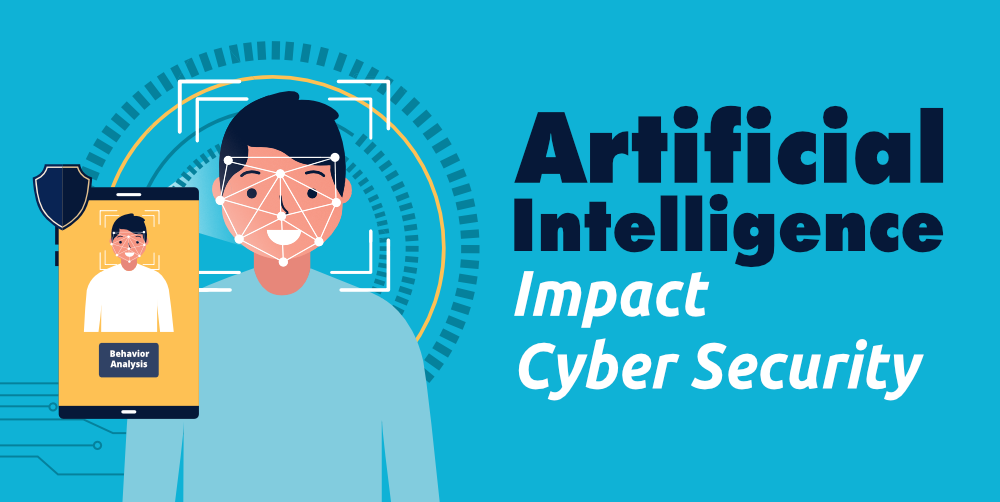 But conventional cybersecurity methods are not enough these days. Hackers can access accounts remotely and cause data breaches, identity thefts, loss of money, etc. In this data age, data is the most unsafe and easily targeted commodity. In such a situation, Artificial Intelligence can provide immense help to the cybersecurity industry, especially since many cybercriminals are already using this technology. As they say, it is only possible to fight fire with fire! But how can artificial intelligence be so important in cybersecurity? Let’s understand this in detail and then see the applications of artificial intelligence in cybersecurity.

Why is Artificial Intelligence so important in Cyber Security?

Artificial Intelligence is a double-edged sword in cybersecurity. There is a lot of concern that hackers can use AI to automate cyber-attacks while simultaneously reducing the numbers of humans needed. After all, if there are complex AI algorithms then hackers need fewer people to coordinate and implement their cyber-attacks which have more chances of being successful. Another advantage that AI provides hackers is that it is much easier to find out system vulnerabilities and attack networks such that the attacks are never even recognized.

But fear not! If Artificial Intelligence can help hackers then it can also help companies in improving their cybersecurity so that there is a lesser chance of cyber-attacks. There are many facets of cybersecurity in which AI can have multiple applications such as intruder detection, prevention of phishing attacks, user behavior analysis, etc. Let’s see these in detail now:

Artificial Intelligence methods can be a big help in the field of intruder detection in cybersecurity. They can help in detecting and defending against any intruders in the system using past insights into intruder activity patterns. For example, intruders in the system may be engaging in unnatural behaviors such as sending and receiving large amounts of data or suddenly changing the communication patterns. These signs of intruders in the system are very difficult to catch for cybersecurity professionals, especially in large companies where there is a lot of network traffic. Here, the AI-powered intruder detection systems can be used to monitor the network for any unwanted intruders.

Sudden changes in the behaviors of existing users can be a sign of a cyber-attack in the network. This could happen if a malicious user stole the login credentials of a legitimate user and then illegally logged into the network using those credentials. But these behavioral changes are extremely hard to identify, especially in a large network. In such a situation, artificial intelligence can be used to detect and block the compromised user accounts which depict suspicious behavioral changes. AI can do this by creating a user behavioral profile of all the users which includes their login and logout patterns, data transfer patterns, etc. Then user behavior analysis on these profiles can help in identifying whenever a user behaves out of their normal behavioral profile which can be used to alert the cybersecurity team that something is out of the ordinary.

Artificial Intelligence can also be extremely helpful in preventing phishing attacks on users in a particular network. These phishing attacks are extremely common in many companies where the employees are sent fraud Emails with the intention of obtaining their company sensitive information such as company passwords, their banking and credit card details, etc. Artificial Intelligence methods such as Natural Language Processing can be used to monitor the employee Emails in their company account and see if there is anything suspicious such as some patterns and phrases that may indicate that the Email is a phishing attempt. This is an extremely important application of AI as phishing attempts are extremely common, so much so that every 1 in 99 Emails might be a phishing attempt.

Traditional antivirus software may not be able to keep up with all the changes to viruses, especially AI-enhanced viruses that are cropping up these days. This is because antivirus software protects the system by scanning all the files on the network to identify if they might actually match with a known virus or malware signature. But this is very difficult to do if the known viruses keep changing and evolving continuously. In that situation, it is best to use Antivirus software that is integrated with artificial intelligence. This type of antivirus detects viruses in the system not by checking if they match with a known virus or malware signature but by identifying their abnormal behavior that is outside the current window of normality for the network. AI-based antivirus systems can do this by leveraging mathematical AI algorithms and data science as well.

Password protection is an integral part of cybersecurity. After all, many times passwords are the only things standing between a hacker and complete access to the account. However, sometimes passwords are not adequate protection for companies. There may be employees that have very simple passwords on their accounts or even have the same password for different type accounts. So hacking those accounts is a child’s play for hackers. In such situations, Artificial Intelligence can be used to provide much better password protection by using features such as facial recognition for opening the accounts. The facial recognition technology can use infra-red sensors and neural networks to map out the distinct patterns on each individual face so that only they are able to open their account and no one else. This advanced AI facial recognition technology can also account for changes such as different hairstyles, wearing a hat, etc. so that no one can fool the system and enter the account illegally.

Is Artificial Intelligence a solution to all Cybersecurity problems?