The HashSet class implements the Set interface, backed by a hash table which is actually a HashMap instance. No guarantee is made as to the iteration order of the set which means that the class does not guarantee the constant order of elements over time. This class permits the null element. The class also offers constant time performance for the basic operations like add, remove, contains and size assuming the hash function disperses the elements properly among the buckets, which we shall see further in the article.
Few important features of HashSet are: 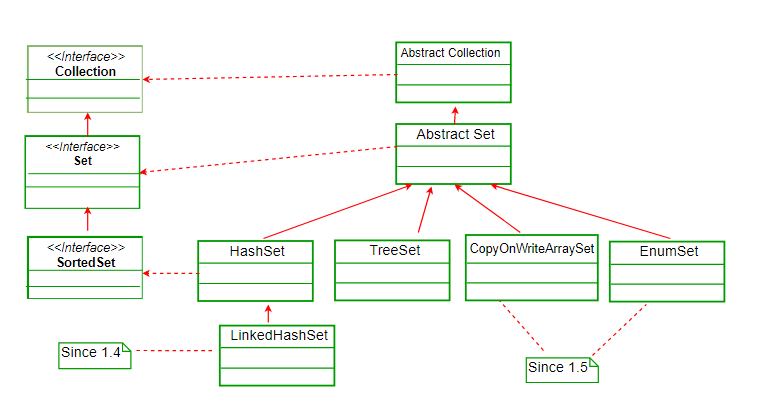 Now for the maintenance of constant time performance, iterating over HashSet requires time proportional to the sum of the HashSet instance’s size (the number of elements) plus the “capacity” of the backing HashMap instance (the number of buckets). Thus, it’s very important not to set the initial capacity too high (or the load factor too low) if iteration performance is important.

Example: If internal capacity is 16 and load factor is 0.75 then, number of buckets will automatically get increased when the table has 12 elements in it.

NOTE: The implementation in a HashSet is not synchronized, in the sense that if multiple threads access a hash set concurrently, and at least one of the threads modifies the set, it must be synchronized externally. This is typically accomplished by synchronizing on some object that naturally encapsulates the set. If no such object exists, the set should be “wrapped” using the Collections.synchronizedSet method. This is best done at creation time, to prevent accidental unsynchronized access to the set as shown below:

Internal working of a HashSet
All the classes of Set interface internally backed up by Map. HashSet uses HashMap for storing its object internally. You must be wondering that to enter a value in HashMap we need a key-value pair, but in HashSet we are passing only one value.

Storage in HashMap
Actually the value we insert in HashSet acts as key to the map Object and for its value java uses a constant variable. So in key-value pair all the values will be same.

Implementation of HashSet in java doc:

If we look at add() method of HashSet class:

We can notice that, add() method of HashSet class internally calls put() method of backing HashMap object by passing the element you have specified as a key and constant “PRESENT” as its value.

This article is contributed by Dharmesh Singh. Please write comments if you find anything incorrect, or you want to share more information about the topic discussed above.