Prerequisite – Graphs
To draw graph using in built libraries – Graph plotting in Python
In this article, we will see how to implement graph in python using dictionary data structure in python.
The keys of the dictionary used are the nodes of our graph and the corresponding values are lists with each nodes, which are connecting by an edge.

This simple graph has six nodes (a-f) and five arcs: 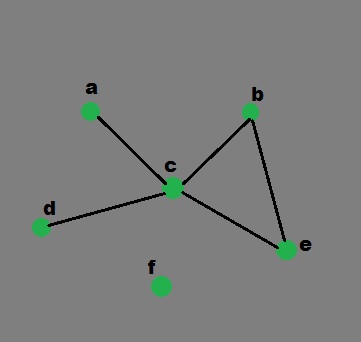 To generate the path from one node to the other node:

Using Python dictionary, we can find the path from one node to the other in a Graph. The idea is similar to DFS in graphs.
In the function, initially, the path is an empty list. In the starting, if the start node matches with the end node, the function will return the path. Otherwise the code goes forward and hits all the values of the starting node and searches for the path using recursion.

Program to generate all the possible paths from one node to the other.:

In the above discussed program, we generated the first possible path. Now, let us generate all the possible paths from the start node to the end node. The basic functioning works same as the functioning of the above code. The place where the difference comes is instead of instantly returning the first path, it saves that path in a list named as ‘paths’ in the example given below. Finally, after iterating over all the possible ways, it returns the list of paths. If there is no path from the starting node to the ending node, it returns None.

Program to generate the shortest path.: