In the Open Source ecosystem, Git and Github are widely used for efficiently managing large projects and collaborating with other developers worldwide. Hence a general Forking Workflow is followed by every developer who is contributing to these Open Source Projects. So let’s deep dive to look at how exactly this Working by Forking works in an Open Source Ecosystem.

Forking a repository and Cloning it in the local environment

Just visit the Open Source Project’s Github page you want to contribute, then after choosing the particular repository just click on the `Fork` button situated at the top right corner. Now that you have created your own copy of that repository by forking it, let’s clone your forked repository in the local machine by running the following command:

Upstream is a repository from where you have forked your local copy of the project. Now to keep your fork up to date and to sync it with the original ‘upstream’ repository let’s add a new remote named upstream:

You can verify the remote by running the 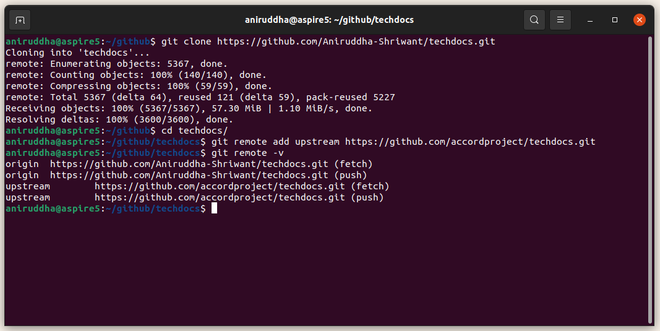 To update your fork with the latest upstream changes, you will need to fetch the upstream repo’s branches and its latest commits using the git fetch command

Now your local master branch is up to date with everything updated upstream.

While working on your development branch if any new commits are made in the upstream’s master branch then you will need to rebase your branch so that maintainers can merge your PullRequest easily and any conflicts would be avoided in advance.

Fetch upstream master and then merge it with your local repository’s master branch:

Rebase your development branch with the master branch:

After rebasing your branch you are ready to push those changes and create a Pull Request on Github.

To conclude, Mastering this workflow etiquette will help you in your Open Source journey and you won’t face any issues which beginner faces while making their contributions to Open Source Projects.

My Personal Notes arrow_drop_up
Previous
Dolist Construct in LISP
Next
Android - Enable Logging in OkHttp
Recommended Articles
Page :
Git Workflow Etiquettes
08, Nov 21
Workflow of OAuth 2.0
20, Sep 21
Basic CI Workflow For Android using GitHub Actions
10, Jan 22
Step Wise Guide to start with Open Source
07, Mar 19
How to Get Started With Open Source Contribution ?
16, Sep 20
How to Contribute to Open Source Android Projects on GitHub?
25, Sep 21
How to Contribute to Open Source Projects on GitHub?
27, Mar 22
How to Install OpenSSH 8 Server from Source in Linux?
09, Sep 21
How to get Source Code of any website ?
09, Sep 21
How to open a file using the with statement
12, Sep 21
How to Open a GitHub Repository in VS Code Online?
20, Sep 21
Ways to Find Out List of All Open Ports in Linux
13, Oct 21
Article Contributed By :