Everyone likes to have a copy of the disk drive to have a chance to recover. Even If you don’t want a copy now – you will want when your first HDD will be broken. It is used to clone all of the data from the initial etalon dump disk to several hosts disks. It will save you a huge portion-time. But what is the action options to clone the disk – lest’s look:

All of these options are available at the Linux command line and are easy to establish and understand. “Everything is a file” at Linux: from disk driver to file at application layer point of view

“Everything is a file” at Linux

Let’s look at how disk drive partition and files look at Linux:

ls is the command to list selected files by names: /dev/sda5 is a special file associated with disk drive partition and just_a_file is a file at files system displayed by console. What is the difference in the output? The first letter “b” shows that /dev/sda5 is a block device file – not just a file. Let’s look from the inside of Linux: the global conception of data storage and manipulation at Linux is – “everything is the file”. It means that even devices a Linux point of view can be represented as files. In the deep of OS code you can find that file is an abstract instance that has several well-structured functions specific for the date it holds:

In this conception – the hard disk drive is represented as a file at /dev/ folder. As a file, this HDD has a read function defined. This read acts like any read of file data at any application layer program. So – we can read the HDD entry. We will be in logic if this file has a write function defined also.

How to detect disk drive files?

Reasonable question is – how to detect the file and the “file size” for a copy. It is possible by using “lsblk” and “df” Linux utilities. First utility list of block devices files of the system. The second utility shows the size of the device in blocks. 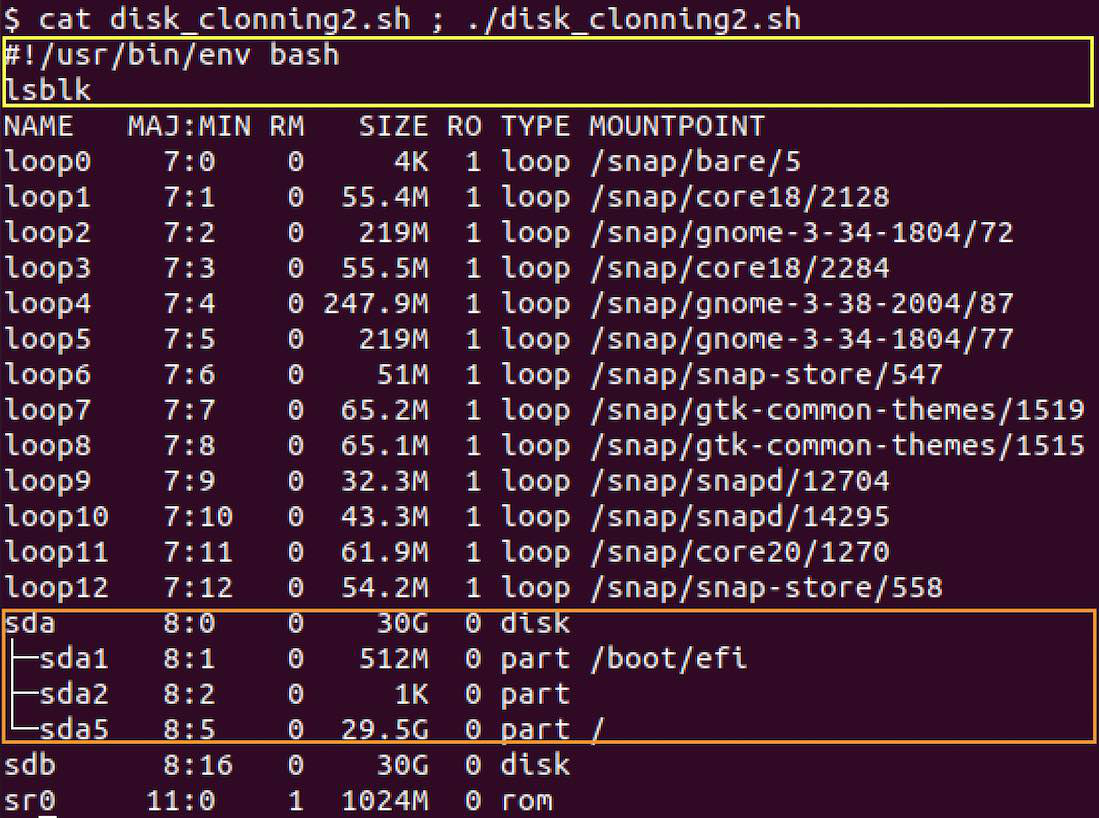 script body in yellow rectangle, the output is next to rectangle, orange rectangle contain our disk info

At console output we can see disk file “/dev/sda” with subfiles represents partitions of this disk: “/dev/sda1“, “/dev/sda2“, “/dev/sda3″.

script body in yellow rectangle, output is next to rectangle

At the console output, we can see the size of our device file in 1K blocks.

Now let’s look at “dd” Linux standard disk dump utility. “dd” operates with files (with data streams exactly) in input and output and just get data from input file block by block and pass this data to the output file. “dd” utility have several running params – we will look at main params and overview how to use it.

Now we go one by one to use cases to look at how to use “dd“. First, let’s look at storing disk images to file. In our case, we will copy cdrom device disk image clone to the file that we will specify.

dd disk to file cloning script running at the console:

As we can see at the output at console raw cdrom dump have been copied at the file at our disk with rate 392Mb/s. Throughput rate can vary on the disk type you using and “bs” param selected. “1457256+0″ is a number of blocks copied in and out on “dd” run.
(please note that /dev/sr0 is cdrom disk name at my system – your system can hold other names)

Using dd to store raw disk image at other disk connected to host:

As mentioned before it is very useful to clone the main disk as it is: from one disk drive to another. “dd” is useful for this case also.

dd raw disk image clone to other disk script running at the console: 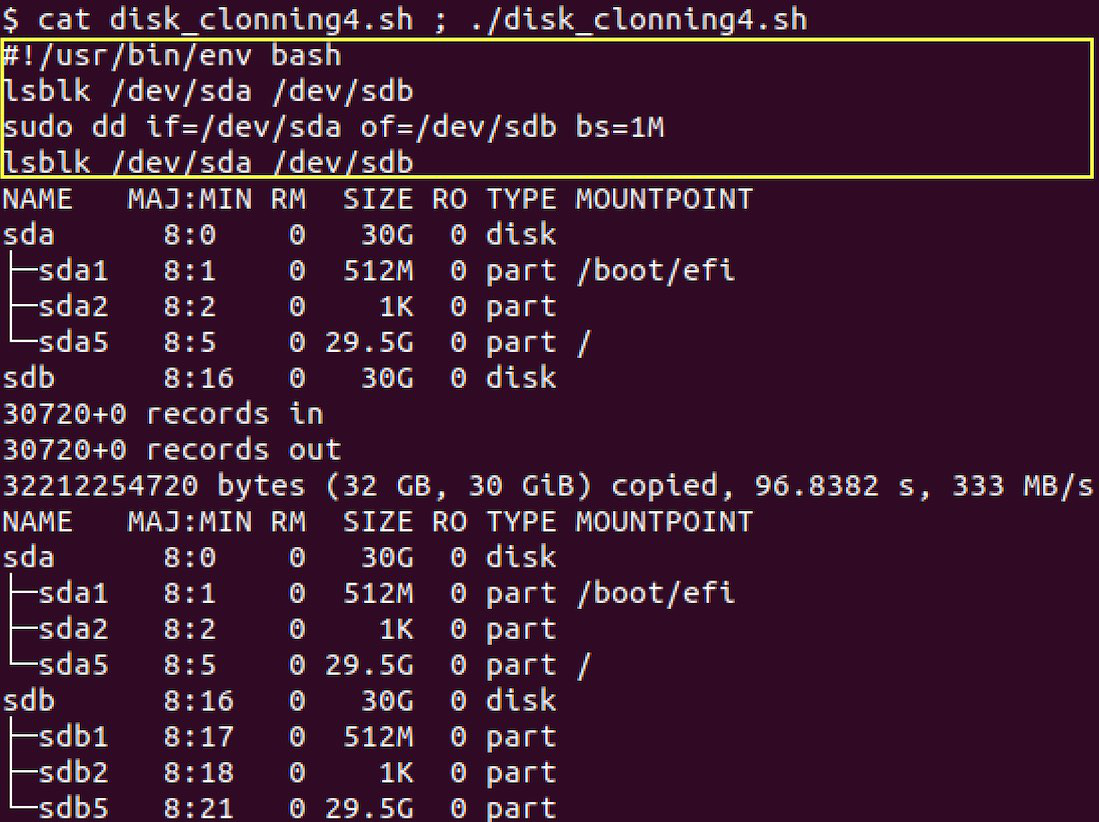 Note: Please note that “sudo” command is needed here to be root on working on dev file directly.

In this example, we will translate the dump of our disk over the network by using nc utility. This utility will be run at our host to put data in network and get it from the network. It will be run local – but you can write both of the sending and receiving scripts at different hosts. 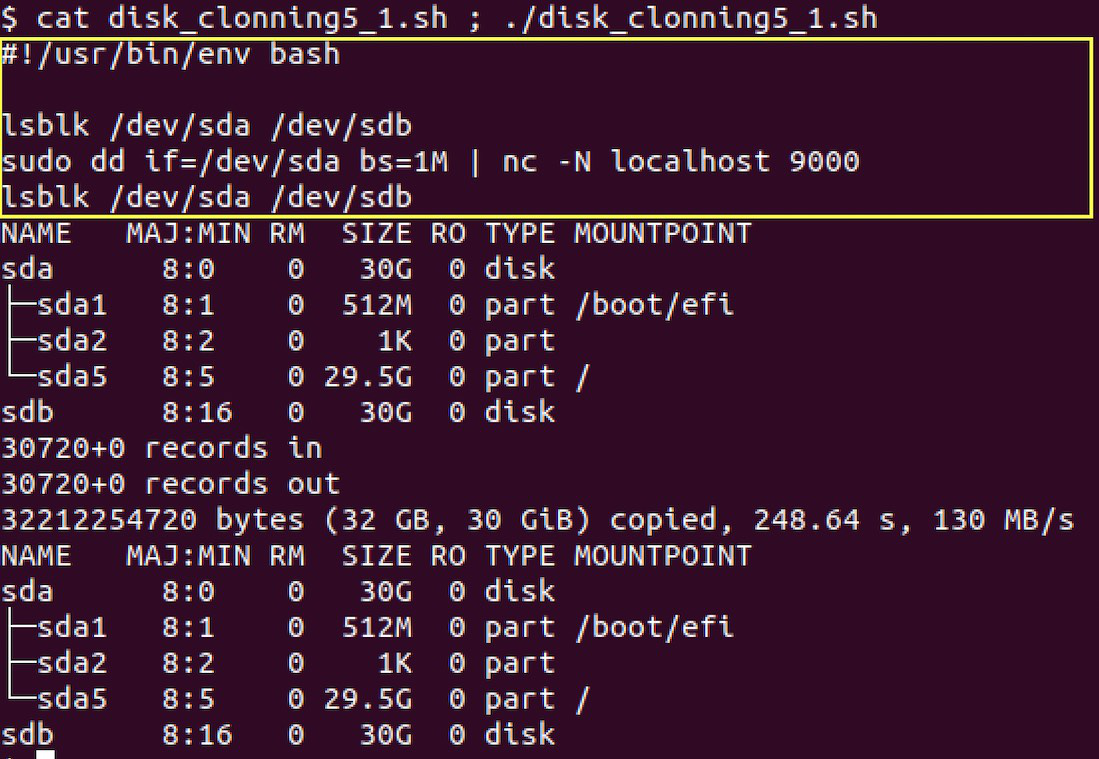 dd here have no “of” parameter – it will write to standard output stream in this case. This stream redirected to following nc call standard input stream by using of “|“.  nc transmit disk data by TCP connection to “localhost” (out current host) port 9000. We only need an appropriate TCP listener at port 9000 to succeed. It will follow next. 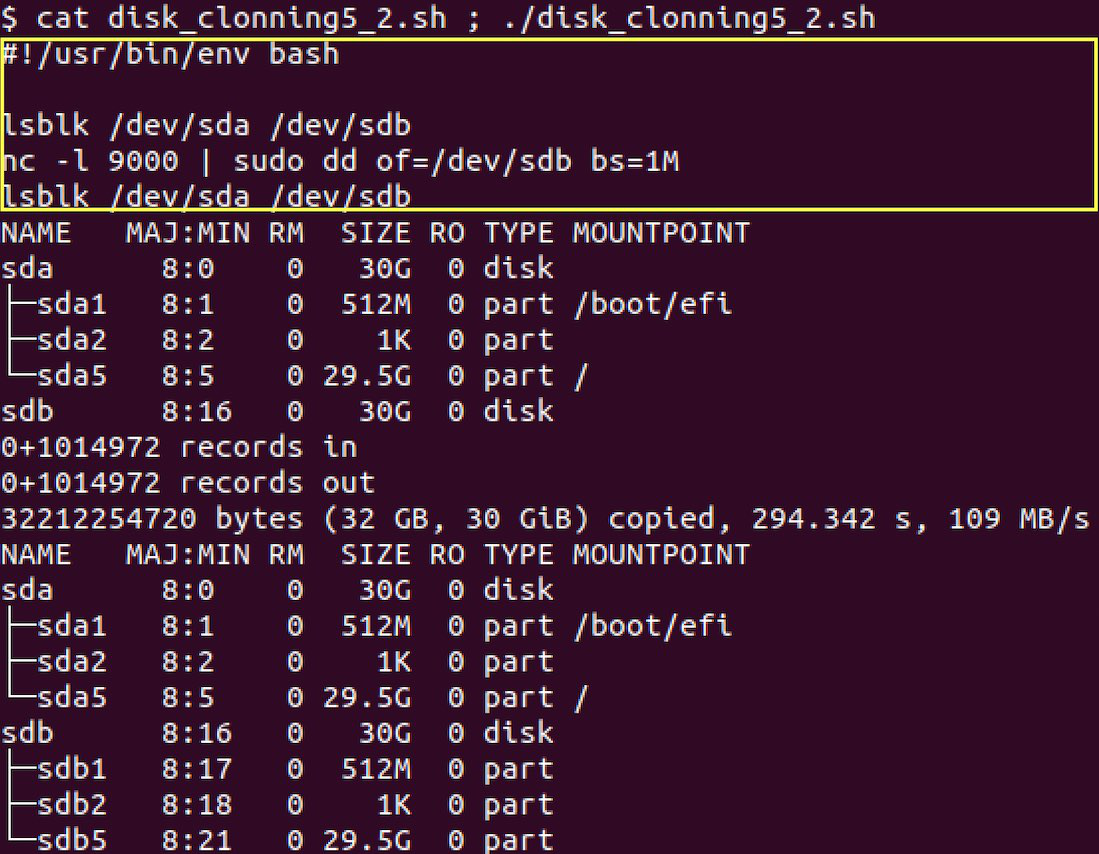