Computational graphs are a type of graph that can be used to represent mathematical expressions. This is similar to descriptive language in the case of deep learning models, providing a functional description of the required computation.
In general, the computational graph is a directed graph that is used for expressing and evaluating mathematical expressions.

These can be used for two different types of calculations:

For example, consider this :

.
For better understanding, we introduce two variables d and e such that every operation has an output variable. We now have:

Here, we have three operations, addition, subtraction, and multiplication. To create a computational graph, we create nodes, each of them has different operations along with input variables. The direction of the array shows the direction of input being applied to other nodes. 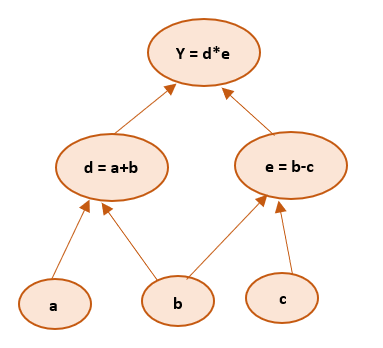 We can find the final output value by initializing input variables and accordingly computing nodes of the graph.

If one wants to understand derivatives in a computational graph, the key is to understand how a change in one variable brings change on the variable that depends on it. If a directly affects c, then we want to know how it affects c. If we make a slight change in the value of a how does c change? We can term this as the partial derivative of c with respect to a.
Graph for backpropagation to get derivatives will look something like this: 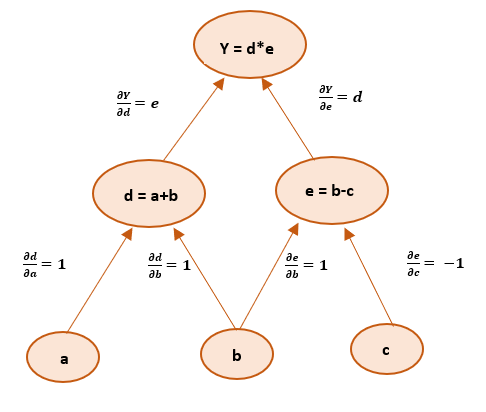 We have to follow chain rule to evaluate partial derivatives of final output variable with respect to input variables: a, b, and c. Therefore the derivatives can be given as : 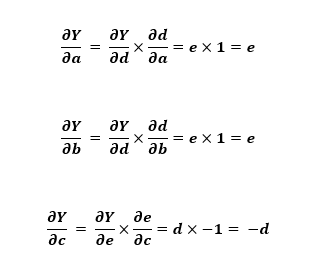 This gives us an idea of how computational graphs make it easier to get the derivatives using backpropagation.