Common Object Request Broker Architecture (CORBA) could be a specification of a regular design for middleware. It is a client-server software development model.

Using a CORBA implementation, a shopper will transparently invoke a way on a server object, which may air a similar machine or across a network. The middleware takes the decision, associated is to blame for finding an object which will implement the request, passing it the parameters, invoking its methodology, and returning the results of the invocation. The shopper doesn’t need to remember of wherever the item is found, its programming language, its software package or the other aspects that don’t seem to be a part of the associated object’s interface.

CORBA Reference Model:
The CORBA reference model known as Object Management design (OMA) is shown below figure. The OMA is itself a specification (actually, a group of connected specifications) that defines a broad vary of services for building distributed client-server applications. several services one may expect to search out in a very middleware product like CORBA (e.g., naming, dealings, and asynchronous event management services) are literally fixed as services within the OMA 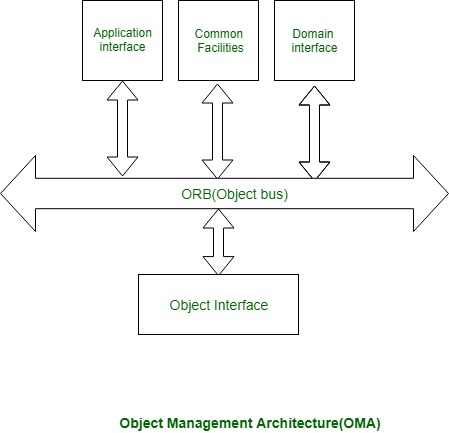 Different parts communicate victimization ORB. ORB is additionally referred to as the item bus. An associate example of the application interface is a distributed document facility. In a very domain interface, it will have domain dependent services, for instance, producing domain.

Note:
There will be different services that may be provided by object interfaces like security services, life-cycle services and then on.