In this article, we will try to understand and compare different aspects of centralized, decentralized, and distributed systems.

Centralized systems are systems that use client/server architecture where one or more client nodes are directly connected to a central server. This is the most commonly used type of system in many organizations where a client sends a request to a company server and receives the response.

Example –
Wikipedia. Consider a massive server to which we send our requests and the server responds with the article that we requested. Suppose we enter the search term ‘junk food’ in the Wikipedia search bar. This search term is sent as a request to the Wikipedia servers (mostly located in Virginia, U.S.A) which then responds back with the articles based on relevance. In this situation, we are the client node, Wikipedia servers are the central server.

These are other types of systems that have been gaining a lot of popularity, primarily because of the massive hype of Bitcoin. Now many organizations are trying to find the application of such systems. 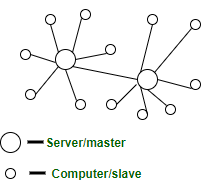 Example –
Bitcoin. Let’s take Bitcoin for example because it is the most popular use case of decentralized systems. No single entity/organization owns the bitcoin network. The network is a sum of all the nodes who talk to each other for maintaining the amount of bitcoin every account holder has.

Scaling –
Vertical scaling is possible. Each node can add resources(hardware, software) to itself to increase the performance leading to an increase in the performance of the entire system.

A distributed system is a collection of computer programs that utilize computational resources across multiple, separate computation nodes to achieve a common, shared goal. Also known as distributed computing or distributed databases, it relies on separate nodes to communicate and synchronize over a common network. These nodes typically represent separate physical hardware devices but can also represent separate software processes, or other recursive encapsulated systems. Distributed systems aim to remove bottlenecks or central points of failure from a system.

Example :
Google search system. Each request is worked upon by hundreds of computers that crawl the web and return the relevant results. To the user, Google appears to be one system, but it actually is multiple computers working together to accomplish one single task (return the results to the search query).

The architecture of Distributed System –