GAAP or Generally Accepted Accounting Principles are the rules and procedures defined and developed by the Financial Accounting Standards Board (FASB) that an organization has to follow for the proper creation of financial statements consistent with the industry standards. The primary objective of GAAP is to ensure a basic level of consistency in the accounting statements of an organization. Financial statements prepared with the help of GAAP can be easily used by the external users of the accounts of a company. It also allows an individual or a group of individuals to make inter-firm and intra-firm comparisons for making investment decisions. The Generally Accepted Accounting Principles also ensure the accuracy and fairness of the financial statements. These principles are not universal and are changed or modified by countries and accounting bodies according to the different industries, geographic locations, etc.

These are the basic ideas or assumptions under the theory base of accounting that provide certain working rules for the accounting activities of an organization. There are 13 important basic accounting concepts that are to be followed by companies to prepare true and fair financial statements. 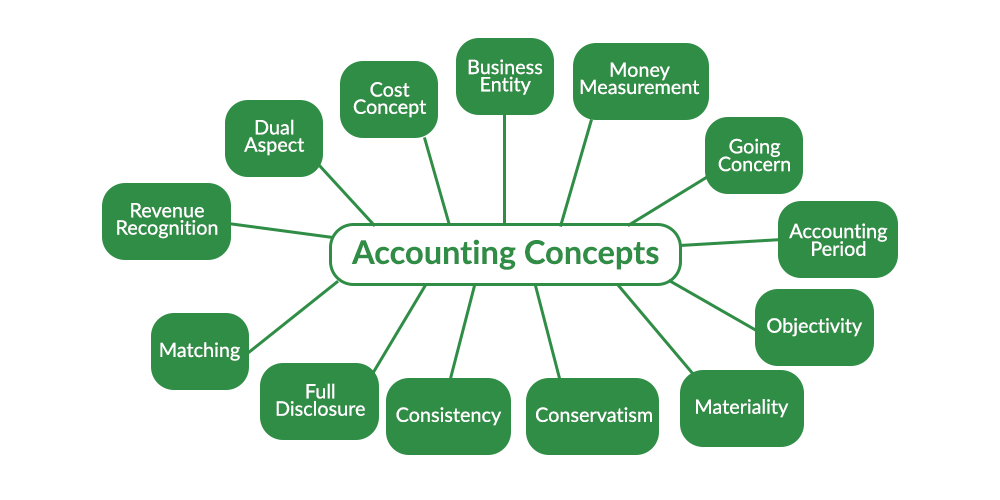 The going concern concept assumes that an organization would continue its business operations indefinitely. It means that it is assumed that the business will run for a long period of time, and will not liquidate in the foreseeable future. It is one of the most important assumptions or concepts of accounting. It is because the going concern concept provides the firm with the basis to show its assets’ value in the balance sheet.

For example, if an organization purchases machinery for ₹1,00,000, it would not be fair to show the full amount of the machinery in one year, as the company will be getting service or production with the help of machinery for several years. Therefore, the going concern concept by assuming that the business will not liquidate in the foreseeable future states that the firm should record the machinery’s value for its estimated life span. Let’s say, the life span of the said machinery is 10 years. Now, the firm may charge ₹10,000 for 10 years from the profit and loss account.

The cost concept of accounting states that an organization should record all of its assets at their purchase price in the books of accounts. This amount also includes any transportation cost, acquisition cost, installation cost, and any other cost spent by the firm for making the asset ready to use. For example, Radha Ltd. purchased machinery for ₹60 lakh in July 2021. It has also spent a sum of ₹10,000 on transportation, ₹20,000 on its installation, and ₹15,000 on making it ready to use. The total amount at which the organization will record the value of machinery in the books of account would be ₹60,45,000.

Therefore, the cost concept or historical cost concept states that since the company is not going to sell the assets as per the going concern concept, there is no point in revaluing the assets and showing their current value. Besides, for practical reasons also, the accountants of an organization prefer to report the actual costs to its market values. However, the asset amount listed in the books of accounts of the firm does not indicate the value at which it can sell the asset.

The dual aspect or duality concept is the foundation of any business. The concept describes the basis of recording business transactions in the books of accounts. According to the concept, every transaction of the business has a two-fold effect. Hence, it should record every transaction in two places. In simple words, two accounts will be affected by a single transaction. This concept can be expressed as the Accounting Equation:

The accounting equation states that the total of assets of an organization is always equal to the total of its owners’ and outsiders’ claims. These claims or equity of the firm’s owners is also known as Capital or Owner’s Equity, and the outsiders’ claims are known as Liabilities or Creditors’ Equity. For example, Rohan started a business by investing a sum of ₹1 crore. This amount will increase the cash (asset side) of the business, and will also increase its capital by the same amount, i.e., ₹1 crore. Therefore, the effect of the transaction will be shown in two accounts, i.e., cash and capital account. The dual concept forms the base of the Double Entry System of Accounting.

The revenue recognition concept, also known as the realisation concept, as the name suggests, defines that an organization should record its revenue from business only when it is realised, not when the firm has received the cash. Let us understand the concept with the help of an example. Suppose a client pays ₹5,000 in advance for a product. The company will not realise the amount of revenue until its work on the product is complete. Therefore, the firm will initially record the amount as a liability in the unearned revenue account. Once the product has shipped to the client, it will be transferred to the revenue account. Let us take another example of delayed payment. Suppose a company ships its goods amounting to ₹10,000 to its customer on the credit of 30 days. The company will realise the same as soon as the goods have been shipped even though it will receive the amount in the future.

The matching concept states that an organization should recognize its expenses in the same financial year if the expense is related to the revenue of that year. In simple words, if a firm is earning revenue in an accounting period, even though it incurs the expenses related to that revenue in the next accounting year, the expense will be realized in the same accounting year when the revenue has been realized by the firm. For example, if a salesman sells goods worth ₹10,00,000 in February 2022 on a 6% commission made in May 2022, the commission expense of 6% will be charged in the accounting year in which the sales have been made, i.e., 2021-2022. A company should keep in mind that the matching concept should be followed only after the realisation concept has been fulfilled.

As the name suggests, the full disclosure concept states that an organization should disclose all the facts regarding its financial performance. It is because the information mentioned in the financial statements is used by different internal and external users, like investors, banks, creditors, management, employees, financial institutions, etc., for making financial decisions. Hence, the concept says that all relevant and material facts or figures about an organisation must be disclosed in its financial statements. To fully ensure this concept, an organization has to prepare its Balance Sheet and Profit & Loss Account based on the format provided by the Indian Companies Act 1956. Besides, different regulatory bodies, like SEBI, also make it compulsory for companies to completely disclose the true and fair picture of their state of affairs and profitability.

The consistency concept states that there should be consistency or uniformity in the accounting practices and policies followed by an organization. It is because the accounting information provided by an organization through its financial statements would be beneficial only when it allows its users in making a comparison between the statements of different years or with statements of other firms. However, it does not mean that the organization cannot change its accounting policies when necessary. The firm can make required changes in its policies by properly indicating the probable effect of the changes on its financial results. For example, if a company’s management wants to compare the net profit of the current year with the previous year, it can do so only when the accounting policies followed by the company in both years are the same. For example, if a company has used the SLM depreciation method in the previous year and the WDV method of depreciation in the current year; it would not be able to compare the figures.

The conservatism or prudence concept believes in playing safely, while recording the transactions in the book of accounts. According to this concept, an organization should adopt a conscious approach and should not record its profits until they are realised. However, it states that the organization should realise any loss even if the company has not incurred it yet, or if there is a slight possibility of loss to occurring in the future. No matter how pessimist attitude this concept shows, it is essential for an organization to deal with uncertainty and allows them to protect the interest of creditors against any unwanted distribution of its assets. For example, if an organization feels that a certain debtor will not pay the amount in the future, it should open a Provision for Doubtful Debts Account. Similarly, an organization should not record its increase in the market value of stock until it is sold.

The materiality concept suggests that an organization should focus on material facts only. In simple words, an organization should not waste its time on immaterial facts that do not help in determining its income for the period. In order to differentiate a fact as material or immaterial, one should consider its nature and the amount involved. Therefore, a fact will be considered material if the accountant believes that the information can influence the decisions of a user of the financial statements. For example, the original cost of stationery is insignificant to the users of financial statements. Hence they are not included in the closing stock of the statements and are shown under expenses. Similarly, suppose the company has incurred an expense on the marketing of the firm or its products. In that case, it will be shown in the financial statements as it is a material fact for the users and can change their decisions.

The objectivity concept of accounting states that an organization should record transactions in an objective manner. It means that the recording should be free from any kind of biasness by accountants and other people. Objectivity in the recording of transactions is possible when the transactions of the firm are supported by verifiable vouchers or documents. The purpose of the objectivity concept is that it does not let the firm’s management and accountants’ opinions impact the financial statements and provide a false image. The concept can be helpful for an organization in creation of its goodwill. Besides, it warns the companies about the penalties if there is any sort of misinterpretation in the financial statements.