Android ListView is a ViewGroup which is used to display the list of items in multiple rows and contains an adapter which automatically inserts the items into the list.

The main purpose of the adapter is to fetch data from an array or database and insert each item that placed into the list for the desired result. So, it is main source to pull data from strings.xml file which contains all the required strings in Kotlin or xml files.

Adapter holds the data fetched from an array and iterates through each item in data set and generates the respective views for each item of the list. So, we can say it act as an intermediate between the data sources and adapter views such as ListView, Gridview.

Now, we going to create an android application named as ListViewInKotlin using an arrayadapter. Open an activity_main.xml file from \res\layout path and write the code like as shown below.

In this file, we declare the LisitView within LinearLayout and set its attributes. Later, we will access the ListView in Kotlin file using the id.

When we have created layout, we need to load the XML layout resource from our activity onCreate() callback method and access the UI element form the XML using findViewById.

We need to run using Android Virtual Device(AVD) to see the output. 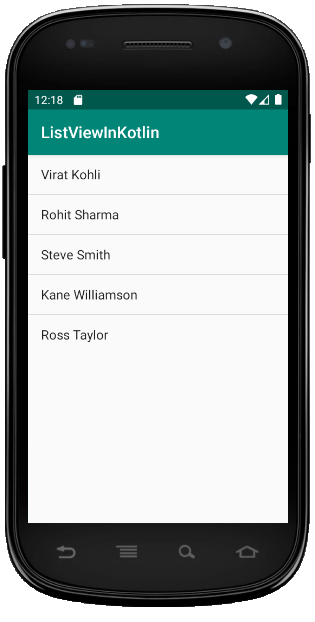