IoT architecture is a framework that specifies the physical elements, network technical arrangement and setup, operating procedures, and data formats to be used. IoT architecture can differ greatly based on execution; it must be flexible enough for open protocols to handle many network applications. 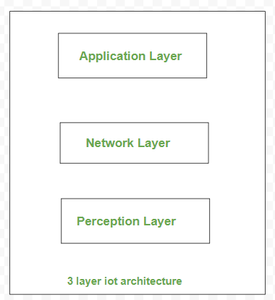 A three-layer architecture is the common and generally known structure. It was first used in the initial phases of this IoT study. It indicates three levels: perception, network, and application.

This perception  layer is the IoT architecture’s physical layer. In these  sensors and embedded systems are used mainly. These collect large amounts of data based on the requirements.  This also includes edge devices, sensors, and actuators that communicate with the surroundings.  It detects certain spatial parameters or detects other intelligent things /objects in the surroundings.

The data obtained by these devices must be distributed and stored. This is the responsibility of the network layer. It binds these intelligent objects to other intelligent/ smart objects.  It is also in charge of data transfer. The network layer is in-charge of linking smart objects, network devices, and servers. It is also used to distribute and analyze sensor data.