Architecture of Internet of Things (IoT)

So. here in this article we will discuss basic fundamental architecture of IoT i.e., 4 Stage IoT architecture. 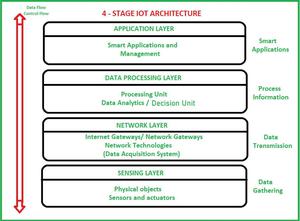 So, from the above image it is clear that there is 4 layers are present that can be divided as follows: Sensing Layer, Network Layer, Data processing Layer, and Application Layer.