Deadlock, Race condition, Division by zero, Infinite loops, Infinite recursion…you might have heard these terms in computer programming and you might have knowledge that how the above terms can create a big problem in software if it exists in your program. If computer programming is one of the most interesting field anyone can choose ever then it’s also one of the most dangerous paths someone can choose for themselves. A programmer knows how much he/she needs to be careful while writing bug-free code. One small mistake can make someone a rich person just in a few seconds and it can also cause a loss of money in business and even human life. 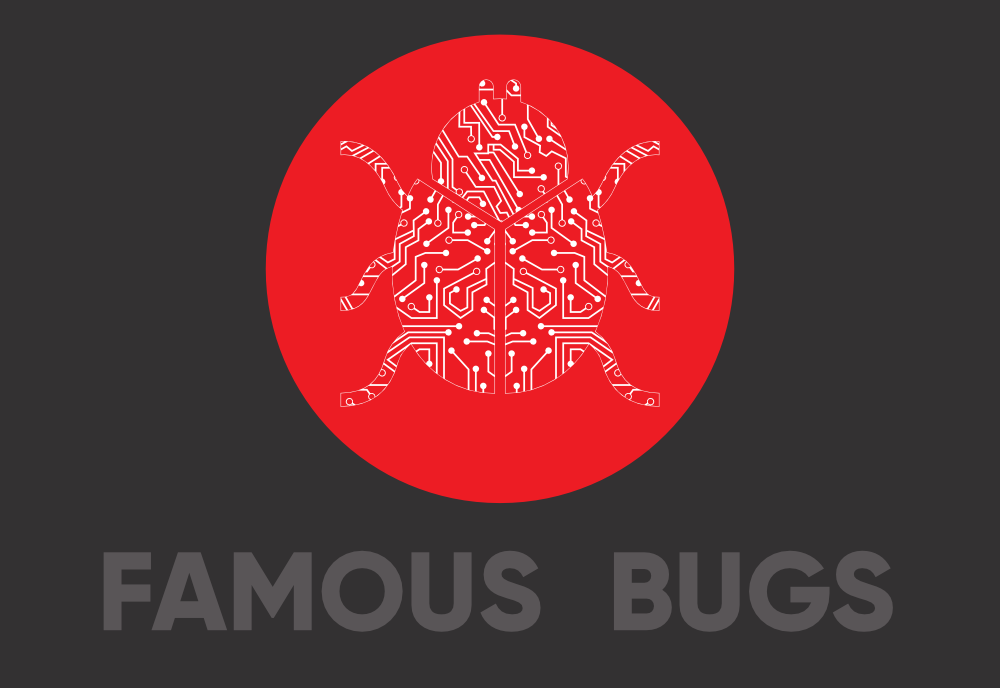 We are going to talk about some of the famous bugs made by programmers in history and how it affected business and human’s life.

1. Ariane 5 Rocket Failure (1996): Ariane 5 explosion was one of the most expensive software mistakes in history. This famous European rocket is used to launch a satellite and the development cost of it was around 8 Billion. The rocket was exploded just after 40 seconds of its launch. The reason behind its failure was Integer Overflow which is a very common bug in computer programming. It’s very important to take care of the memory size required by a variable while declaring it and that was the mistake during the development of this rocket. The coding was done in Ada. After the investigation of the team, they found that the line of code tries to fit a 64-bit number into a 16-bit space. The result of this failure was the loss of $370 million.

2. Y2K Bug (1999): During the 1960s computer engineers followed the approach to write programs using two-digit code for the year leaving “19.” Most of them thought that writing “19” before the variable “year” was an unnecessary waste of memory. For example, to represent 1970 they only used two end digits “70”. Everything was fine till December 31, 1999. But after that, once January 1, 2000, hit many computers read the year as 1900 due to two digits representation “00”. This bug was called Y2K or “millennium bug” (The letter K, stands for kilo used to represent the number 1, 000. So, Y2K stands for the Year 2000.). It affected banks that calculate interest rates on a daily basis, centers of technology such as power plants, transportation and a lot of things. Billions of dollars were spent in order to upgrade computer systems worldwide.

3. Patriot Missile Failure (1991): When a mistake is made in military operation it risks the lives of many. During the First Gulf War, an American Patriot Missile was deployed to detect and intercept a Scud missile attack that relied on very accurate timing. Due to the rounding error in the system, it calculated the incorrect time and the missile failed to intercept Iraqi Scud missile attack on an army barracks in Saudi Arabia. 28 American soldiers lost their lives and 100 people were injured in that attack.

4. AT&T (1990): AT&T opted to upgrade more complex software than the current and hopes to improve long-distance calling but that backfires and the network became disabled. For nine hours AT&T customers couldn’t make a long-distance call. 75 million phone calls missed and 200 thousand airline reservations lost due to this failure. The problem was a race condition in switching station code that handles switching station crashes. A race condition was caused by a switch statement inside of a loop. AT&T lost $60 million because of this error in the code.

Later Google changed the view count to a 64-bit signed integer to fix the bug.

6. Mariner 1 Software Bug (1962): Mariner 1 spacecraft is considered as one of the most expensive failures in history. The spacecraft was designed to fly by of Venus but before the satellite could take of the onboard guidance antenna failed and it’s diverted from its intended flight path. The reason behind this failure was a missing overbar. Due to the omission of a hyphen in code, the spacecraft got an incorrect guidance signal. The cost of this rocket was more than $18 million in 1962. The science fiction author Arthur C Clarke described Mariner 1 as “wrecked by the most expensive hyphen in history”.

7. NASA’s Mars Climate Orbiter (1988): Due to the different units of measurement the Mars Climate Orbiter after a 286-day journey from Earth was destroyed. The project was designed with the cost of $125 million to study the Martian surface and climate. The communication was cut and the orbiter entered the Mars atmosphere at a wrong angle rather than entering the planets orbit. The reason was the software that controlled the Orbiter thrusters used imperial units (pounds of force), rather than metric units (Newtons) and it’s conflicted with each other.

8. Pentium FDIV Bug (1993): Many computers run on Intel technology and Intel is always known for its good processors but a bug was found in the Pentium x86 processor by a professor of mathematics Thomas Nicely in 1993. This maths error was dividing floating-point numbers within a specific range. For example, dividing 4195835.0/3145727.0 yielded 1.33374 instead of 1.33382, an error of 0.006%. Not all the processors were faulty but around 5 million defective chips were found and Intel agreed to replace the chip only if the customers could prove they were impacted by defective chip. Later the company replaced the chips for anyone who complained and the cost was $475 million for Intel.

9. Paypal Error (2007): The largest online payment processors in the world Paypal also faced programming error. PayPal accidentally makes Pennsylvania man Chris Reynolds the world’s richest person with $92 quadrillion. PayPal erroneously credits this amount in his account and he became one thousand times wealthier than the total combined GDP of the whole planet. The exact amount is significant in the world of 64-bit numbers suggesting a programming error. The error was quickly recognized and his account had returned to zero by the time he had logged in.

10. Windows Calculator Bug: Windows calculator also contains a bug with itself. This bug exists in almost all Windows versions including Windows XP, Vista, 7 and Windows 8. You can check it in your system. Open Windows Calculator, then type 4 and take the square root, you will get 2 then subtract 2 from it. Instead of result 0, you will see a different result. You may see different outputs on different versions of windows. The answer is wrong even for sqrt(9)-3. The answer should be zero, but you will see some weird digits. Finally, Microsoft acknowledged this bug in the Calculator app and they fixed it in Windows 10 newer versions. Check the link Bug in Microsoft Windows Calculator.