Prior to that, we need to understand how a program is loaded into memory, and the various (basic) steps involved in the process.

We were compiling our code using the command “gcc -o sample shared.c” When we compile our code, the compiler won’t resolve implementation of the function printf(). It only verifies the syntactical checking. The tool chain leaves a stub in our application which will be filled by a dynamic linker. Since printf is a standard function the compiler implicitly invokes its shared library. More details down.

We are using Idd to list dependencies of our program binary image. In the screen image, we can see our sample program depends on three binary files namely, linux-vdso.so.1, libc.so.6 and /lib64/ld-linux-x86-64.so.2.

The file VDSO is a fast implementation of the system call interface and some other stuff, it is not our focus (on some older systems you may see the different file name in a line of *.vsdo.*). Ignore this file. We have an interest in the other two files.

The file libc.so.6 is the C implementation of various standard functions. It is the file where we see printf definition needed for our Hello World. It is the shared library needed to be loaded into memory to run our Hello World program.

The third file /lib64/ld-linux-x86-64.so.2 is in fact an executable that runs when an application is invoked. When we invoke the program on the bash terminal, typically the bash forks itself and replaces its address space with an image of the program to run (so-called fork-exec pair). The kernel verifies whether the libc.so.6 resides in the memory. If not, it will load the file into memory and does the relocation of libc.so.6 symbols. It then invokes the dynamic linker (/lib64/ld-linux-x86-64.so.2) to resolve unresolved symbols of the application code (printf in the present case). Then the control transfers to our program main. (I have intentionally omitted many details in the process, our focus is to understand basic details).

Let us work with a simple shared library on Linux. Create a file library.c with the following content. 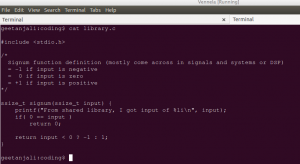 The flag-shared instructs the compiler that we are building a shared library. The flag -fPIC is to generate position-independent code (ignore for now). The command generates a shared library liblibrary.so in the current working directory. We have our shared object file (shared library name in Linux) ready to use.

The flag -library instructs the compiler to look for symbol definitions that are not available in the current code (signum function in our case). The option -L is a hint to the compiler to look in the directory followed by the option for any shared libraries (during link-time only). The command generates an executable named “sample“.

If you invoke the executable, the dynamic linker will not be able to find the required shared library. By default, it won’t look into the current working directory. You have to explicitly instruct the tool chain to provide proper paths. The dynamic linker searches standard paths available in the LD_LIBRARY_PATH and also searches in the system cache (for details explore the command ldconfig). We have to add our working directory to the LD_LIBRARY_PATH environment variable. The following command does the same.

The sample output on my system is shown below.

It is a workbook like an article. You won’t gain much unless you practice and do some research.

1. Create a similar example and write your own function in the shared library. Invoke the function in another application.

2. Is (Are) there any other tool(s) that can list dependent libraries?

— Venki. Please write comments if you find anything incorrect, or if you want to share more information about the topic discussed above.