What is Kirchhoff’s law?

In 1842, the scientist Kirchhoff formulated two laws to find the distribution of current in different conductors in any complex electric circuit. These rules are as follows:

It is clear from the figure that the resistances P and Q are in series when the key K2 is open. Similarly, resistances R and S are in series, but P and Q together (arm ABC) and R and S together (arm ADC) are connected in parallel to each other. Since the side BD of the galvanometer is placed like a bridge over the sides ABC and ADC of the quadrilateral, this circuit is called a bridge. 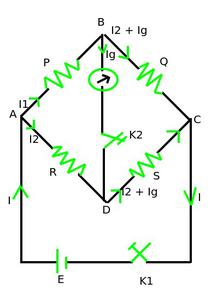 Establishment of formulas from Kirchhoff’s law:

So according to Kirchhoff’s law, in closed path ABDA,

And in closed path BCDB,

Putting Ig = 0, in above equations,

This is the necessary condition for the balance of the Wheatstone bridge. With the help of the above formula, knowing the values ​​of three resistors P, Q and R, the value of the fourth resistance S can be found.

Generally, the arms with resistance P and Q are called ratio arms. The arm AD with resistance R is called the known arm and the arm CD with resistance S is called the unknown arm. In the equilibrium position of the bridge, changing the position of the cell and the galvanometer does not affect the state of equilibrium (in this case the potential of points A and C will be the same), so the arms AC and BD are conjugate arms. are called. The sensitivity of the bridge is highest when the resistances of all four arms are almost equal.

The meter bridge is shown in the figure. It is made of a one-meter long wire of uniform cross-sectional area which is clamped vertically between two thick plates of metal, as shown. There are two gaps in the metallic plate between which resistors can be connected. The endpoints where the wires are held are connected to the cell by a key. One end of the galvanometer is connected to a metallic plate in the middle of the gap. The other end of the galvanometer is connected to the jockey. A jockey is essentially a metallic rod with a sharp edge at one end and which can be glide over a wire to form an electrical connection. R is an unknown resistance whose value we wish to find. Combine it in either of the spaces.  A standard known resistance S is connected between the second spacing. 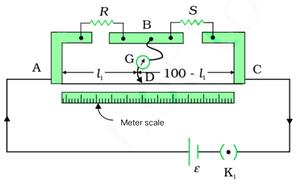 Question 1: Find the equivalent resistance between points A and C in the circuit shown in the figure below:

The equivalent circuit of the circuit shown in the above figure is given as: 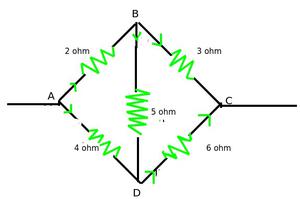 In the balanced state, VB = VD, so no current will flow through the 5 Ω resistance.

If the equivalent resistance between the points A and C is R, then.

Question 3: The electric circuit of a balanced Wheatstone bridge is shown in Figure. Calculate the resistance x.

Let the total resistance in arm BC be R. Since the bridge is balanced, therefore: 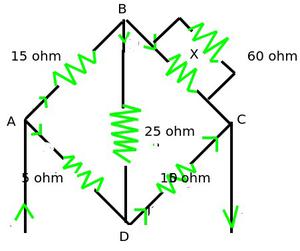 Question 4: What is Meter Bridge? And what kind of precautions do we need to perform measurement using Meter Bridge?

A Meter bridge is a device based on the principle of the Wheatstone bridge, with the help of which the resistance and specific resistance of a conductor can be determined. In this, a 1-meter long wire acts as the proportional side.

Question 5: In the following figure the current through 4Ω resistor is?

It is an example of balanced wheat-stone bridge.

So, No current will flow through 16 Ω resistance.

As we know that current divide in inverse ratio, current through 4Ω resistance is,