What is Broadcast Domain ?

When a computer network is separated logically then it is a Broadcast Domain. In a Broadcast Domain, there is reachability among nodes using broadcast at layer 2 of the OSI (Open System Interconnection) Model i.e. Data Link Layer.

Switches forward the broadcast as received from the sending device to all the interfaces leaving the one from where it is coming. It gives high-level communication and dependability through an Ethernet connection.

Example- VLAN (Virtual Local Area Network). Here, a set of multiple computers form a broadcast domain using a virtual connection as they are physically separated. Another example is in the allocation of IP Addresses dynamically using the Dynamic Host Configuration Protocol.  Whenever a request comes from the device for an IP address then the request will be sent in the network to the DHCP server if it is available and the server will send the next available IP address to the device.

Reliable and speedy communication is provided in offices located in different places. The switched environment is preferred for broadcast domains and they will never break in their domain.

The disadvantage is the dropping of data signals after reaching the interface of routers in a network. The other one is with the increase in broadcast domains, broadcasts also increase that will degrade the quality of a network. 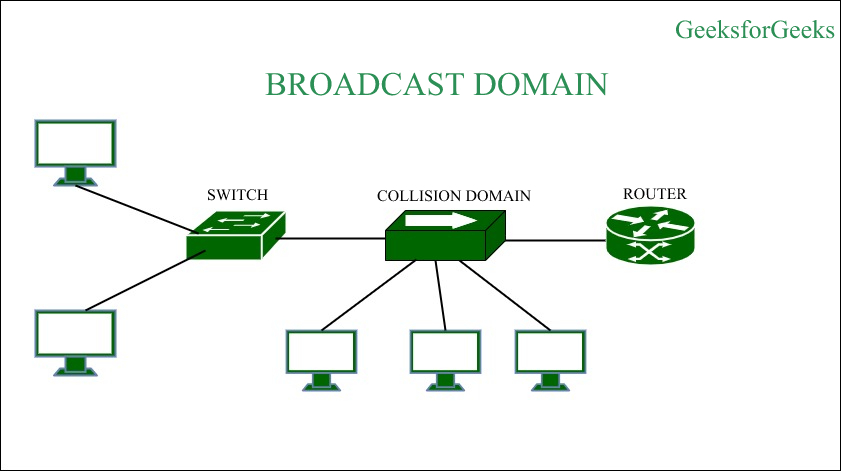 In the example above, sending host will send the broadcast in the domain which is to be forwarded by a switch to all ports so that everyone connected will get a copy of that broadcast. The router divides the network into network segments i.e. division into multiple broadcast domains and does not forward broadcast traffic.