Attackers or Hackers inject the malicious script or payload ‘blindly’ on some web pages without having any assurance that it will be executing. Web pages that are likely to save their payload into the database are the most important carrier for Blind XSS attacks.

If the contact form is the part of the webpage and has to store its data to web server or database, then here the attackers come with his attack. The attacker injects code in contact forms and waits for the server-side user or team member to open or trigger that malicious code or payload to execute. 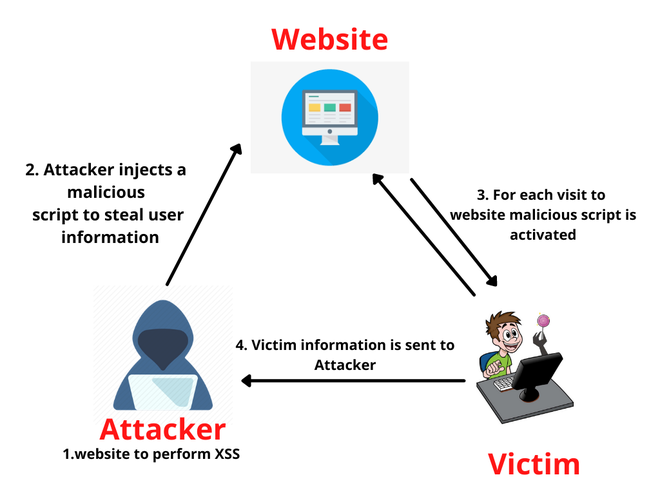 Many different attacks can be leveraged through the use of cross-site scripting, including:

Blind XSS attacks can occur in:

For example, imagine you have an internal application to manage the inventory of an online shop. In this application, the dealers enter the information of different products that are stored in a database server. The same database is also used by an online shop application, which is exposed to the internet for all the customers and needs to read the product information from the initial database. If a user injects a malicious string into the internal application, it is not important if the online shop has properly implemented input validation controls, as the information in the store is read from the same database, so the shop will show the attack.

For example in feedback forms, an attacker can submit the malicious payload using the form, and once the backend user/admin of the application will open the attacker’s submitted form via the backend application, the attacker’s payload will get executed. Blind Cross-site Scripting is hard to confirm in the real-world scenario but one of the best tools for this is XSS Hunter.

Attackers can place the malicious scripts within the topic title in a forum or chat forum board. Again, most commonly, the server will save their post to a database, and the stored information can get exposed to other viewers, as the moderators over some time. In this scenario, the script may get clean when delivered to normal users, which will disable the malicious code. However, when a moderator of the forum will load a forum management web page, like a thread popularity report, for example, the malicious topic titles may be loaded and consequently, the attacker’s script would be executed, calling back with stolen information, redirecting the user or cause a denial of service attacks by for example calling code within the admin interface that stops the forum. Typical user targets are moderators of forums or chat forum boards, who load forum content from management web sessions to perform administrative tasks and the aim is again, security-related.

There are tools that can make this a lot easier to detect and deal with. XSS Hunter is a fantastic tool for the detection of Blind XSS in any web-based application.

The way it works is you inject the payload as an external JavaScript tag :

When an XSS vulnerability is present in the application, this script will be executed by the client and the script payload will execute. The payload will take a snapshot of the page, as well as the HTML source, cookies (without HttpOnly set), and other useful essential information. Now we can narrow down the XSS vulnerability whenever a user triggers it. The other great thing about the tool is that it has been open-sourced so you can set up a private instance as well.

Some more detection tools are available on the Internet are: