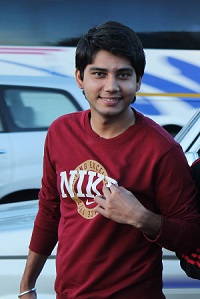 EA India has been on a hiring spree lately. (Yes, we do keep track) It has staffed 500+ employees in it’s Hyderabad Office which is being developed for running business operations and as a rapidly growing studio. When we went about interviewing Rubal who is working as a Software Developer at EA Games, we knew this would be an exciting interview given the number of EA games we have played all through these years. In this interview Rubal talks about what is so special about EA’s culture and shares his views on working in the gaming industry given Zynga’s performance post the IPO.

You can also download Rubal’s resume by logging in to see what are the skills required to get into the gaming industry.

1. What makes EA Games so special? Why did you decide to join EA?

Rubal : The first thing that comes to one’s mind when they talk about the gaming industry is the amount of innovation and creativity that goes into the work. The amount of R&D in terms of technology and user experience that the developers put in to please the insatiable minds of gamers all over the world is remarkable. EA over the years has made a name for itself that no one else has in this business. Right from yearly franchises like FIFA, Need for Speed and Madden NFL to social and mobile games like those from PopCap – the journey has been tremendous.

My decision to join EA was driven by the fact that I always have been fascinated by games and the job role aligned with my career interests as well. The thought of being a part of a community of game developers, who have provided us with captivating experiences through games like Battlefield, Crysis and Medal of Honor, was more than enough to get me to choose EA.

2. Can you describe the complete hiring process of EA Games?

Rubal : EA has an extensive hiring process. Since this was their first recruitment drive across Premier colleges in India, they wanted to take the best of the lot. The first round like most companies was an online objective test. The test covered areas like Mathematics, C/C++ programming, Java programming and Algorithms. Shortlisted candidates were called for a written programming test wherein coding and design skills were checked which was then followed by two technical interviews, and two additional HR meetings.

3. What were the tricky questions you encountered? How did you tackle them?

Rubal : EA’s primary focus was on quality. They focused more on the design and algorithmic approach. Emphasis was given to the projects and internships which I had done earlier. Questions were pretty straightforward, but continued into stimulating and exciting discussions based on the answers – which I thoroughly enjoyed. The first thought that crossed my mind during the interview is the kind of approach they have towards employees. They are a company that respects an individual’s point of view and encourages one to voice their opinion.

The key is to be relaxed and calm and understand the Interviewer’s basis behind asking the question. Don’t lose track of what the question is and don’t get into an endless discussion over proving your point. Have an open discussion as far as possible, for it would show the maturity you have towards different opinions on the subject. To summarize, the interview touched aspects of DSA, databases, networks and operating systems. So having your concepts clear will sure give you the necessary boost.

4. What is EA Games culture like? How does it impact the overall process of working in EA?

Rubal : The fact that stands out most at EA India is that everyone, right from game QA testers to the Development Directors are extremely passionate about what they do – and this is what that keeps you motivated all the time. This I believe is very important to be successful at your work and this sets working here apart from any other IT firm. We have a dedicated Gaming Room right next to where I sit and everyone loves to come and show off their gaming skills. EA hence has the perfect atmosphere that balances both work and play.

5. Given Zynga’s dismal performance do you think gaming industry in general is a good place to be in from a career perspective?

Rubal : In the gaming industry, we need to look at a way of keeping our customers engaged all the time. The fact that EA continues to do well year after year is an example of the splendid higher management it is led by. We are not only working constantly on having the team ramped up on new platforms to adapt to changing technology but are also have team looking forward towards the future.

There are a lot of risks but the kind of challenges one faces and the amount of learning in one single project in this industry is novel in its own way. Change is the only constant, and that should be guiding your modus operandi in this industry and hence to be here you need to be extremely flexible and be able to adapt to different requirements based on the changes – this is what makes the journey fun!

6. What were some important factors according to you that made you stand out?

Rubal : I think it was the way I conducted myself in the interview that really helped. The emphasis was not just on getting a satisfactory response but on the approach and on out-of-the- box thinking. I voiced all my thoughts and discussed my ideas in open and had interesting discussions on all of them. Moreover, I was very vivid in my explanation when asked about my projects. I was lucky to have had worked on a game development project and played a major role in my selection.

7. Currently, what are you working on and how has been the experience till now?

Rubal : I work in a business unit which primarily deals in developing and supporting popular EA labels for multiple mobile platforms. The kind of work varies from updating the gameplay to upgrading the current services with new technology.

I am currently working on the Apple/iOS platform which requires objective C/C++ knowledge. It has been 1.5 months and I love every minute of my job. It’s not often that one comes across people who are passionate about their jobs, and I consider myself lucky for that. If someone were to ask me what I do for a living – I can proudly beam and say “I make and play games for a living”.