Some Important Compounds of Sodium

Sodium is the sixth most abundant element. Its amount in the earth’s crust is nearly 2.8% by mass. Sodium occurs in compound forms, one of the most prominent sources of sodium is sodium chloride also known as common salt which is available in seawater in large quantities.

It is one of the alkaline metals. Sodium is one of the most abundant elements that are dissolved in seawater. Sodium is a necessary ingredient for human beings but if consumed in excess then it can damage kidneys and it also causes problems of high blood pressure.

Properties of Sodium are:

Uses of Sodium are:

Some important Compounds of Sodium 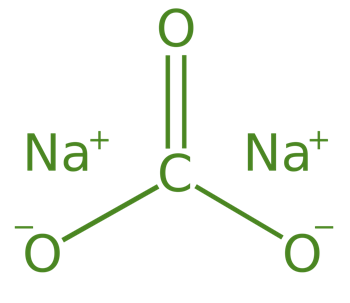 Solvay process is a 4 step process.

Sodium chloride is also known as common salt, its formula is NaCl. It is mainly found in seawater. It can be easily obtained from seawater by the process of evaporation.

Solar evaporation is the process that is used to produce sodium chloride commercially from seawater, it is found that every year India produces around fifty lakh tons of sodium chloride for multiple purposes.

Sodium chloride obtained after the evaporation of seawater is not pure and different processes are used to make it pure. Sodium chloride is also found in rock forms under the earth surface which is formed by a decomposition process that took millions of years.

Sodium Hydroxide is also known as Caustic Soda and its formula is NaOH. It is prepared by Sodium chloride electrolysis which is performed in a special type of cell called the Castner-Kellner cell. Take mercury as cathode and carbon rode as an anode, sodium chloride solution is now electrolyzed. Formation of sodium amalgam takes place at cathode and chlorine gas is released at anode. The process can be easily understood by the following reactions at anode and cathode.

Now sodium amalgam is treated with water to get sodium hydroxide or caustic soda along with hydrogen gas and mercury.

Question 1: What is the nature of Sodium Hydroxide?

Sodium hydroxide is basic in nature as it releases hydroxide ions in water. The basic nature of sodium hydroxide can be tested by reacting it with an acid say HCl because when acid and bases are reacted they form salt and water.

Now it’s clear that NaOH is basic in nature.

Question 2: How de-icing of slippery roads and bridges is done using NaCl?

Question 3: How NH3 can be recovered used in the Solvay process to make Sodium carbonate?

NH3 can be recovered by treating NH4Cl (which is formed in the third step) with Calcium hydroxide.

Question 4: How does Baking Soda make cakes and pastries soft and fluffy?

Baking soda also known as Sodium Hydrogencarbonate carbonate (NaHCO3) is mainly used to make cakes and pastries fluffy and soft. It makes them light as it releases carbon dioxide to make bubbles when heated.

Questions 5: How sodium is biologically important?

Sodium ions are present on the surface of cells which helps in regulating water and other sugar compounds in cells, sodium ions also help in the transmission of nerve signals to different body parts.