Given n number of floating values x, and their corresponding functional values f(x), estimate the value of the mathematical function for any intermediate value of the independent variable x, i.e., at x = a.
Examples:

Stirling Approximation or Stirling Interpolation Formula is an interpolation technique, which is used to obtain the value of a function at an intermediate point within the range of a discrete set of known data points .
Stirling Formula is obtained by taking the average or mean of the Gauss Forward and Gauss Backward Formula . Both the Gauss Forward and Backward formula are formulas for obtaining the value of the function near the middle of the tabulated set .

Stirling Approximation involves the use of forward difference table, which can be prepared from the given set of x and f(x) or y as given below –

This table is prepared with the help of x and its corresponding f(x) or y . Then, each of the next column values is computed by calculating the difference between its preceding and succeeding values in the previous column, like

, and so on.
Now, the Gauss Forward Formula for obtaining f(x) or y at a is:

,
a is the point where we have to determine f(x), x

is the selected value from the given x which is closer to a (generally, a value from the middle of the table is selected), and h is the difference between any two consecutive x. Now, y

becomes the value corresponding to x

and values before x

have negative subscript and those after

have positive subscript, as shown in the table below – 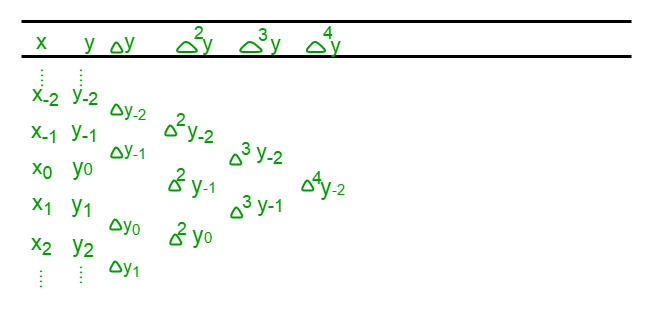 And the Gauss Backward Formula for obtaining f(x) or y at a is :

Now, taking the mean of the above two formulas and obtaining the formula for Stirling Approximation as given below –

Here, q is the same as p in Gauss formulas and rest all symbols are the same.
When To Use

The main advantage of Stirling’s formula over other similar formulas is that it decreases much more rapidly than other difference formula hence considering first few number of terms itself will give better accuracy, whereas it suffers from a disadvantage that for Stirling approximation to be applicable there should be a uniform difference between any two consecutive x.
Reference – Higher Engineering Mathematics by B.S. Grewal.
This article is contributed by Mrigendra Singh. If you like GeeksforGeeks and would like to contribute, you can also write an article using write.geeksforgeeks.org or mail your article to review-team@geeksforgeeks.org. See your article appearing on the GeeksforGeeks main page and help other Geeks.
Please write comments if you find anything incorrect, or you want to share more information about the topic discussed above.