Linux is a multi-user operating system, so it has security to prevent people from accessing each other’s confidential files.

When you execute an “ls” command, you are not given any information about the security of the files, because by default “ls” only lists the names of files. You can get more information by using an “option” with the “ls” command. All options start with a ‘-‘. For example, to execute “ls” with the “long listing” option, you would type ls -l

When you do so, each file will be listed on a separate line in long format. There is an example in the window below. 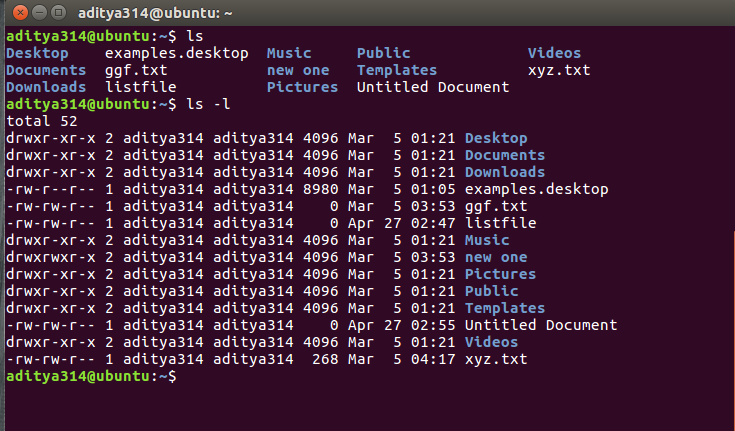 There’s a lot of information in those lines.

Deciphering the security characters will take a bit more work.

First, you must think of those nine characters as three sets of three characters (see the box at the bottom). Each of the three “rwx” characters refers to a different operation you can perform on the file.

User, group and others

For example, consider that the user’s permissions for some files is “rw-” as the first three characters. This means that the owner of the file (“aditya314”, i.e. me) can “read” it (look at its contents) and “write” it (modify its contents). I cannot execute it because it is not a program; it is a text file.

If “r-x” is the second set of 3 characters it means that the members of the group “aditya314” can only read and execute the files.

The final three characters show the permissions allowed to anyone who has a UserID on this Linux system. Let us say we have the permission (“r–“). This means anyone in our Linux world can read, but they cannot modify the contents of the files or execute it.

The command you use to change the security permissions on files is called “chmod”, which stands for “change mode”, because the nine security characters are collectively called the security “mode” of the file.

An example will make this clearer.
For example, if you want to give “execute” permission to the world (“other”) for file “xyz.txt”, you would start by typing

Now you would type a ‘+’ to say that you are “adding” a permission.

Then you would type an ‘x’ to say that you are adding “execute” permission.

Finally, specify which file you are changing.

You can see the change in the picture below. 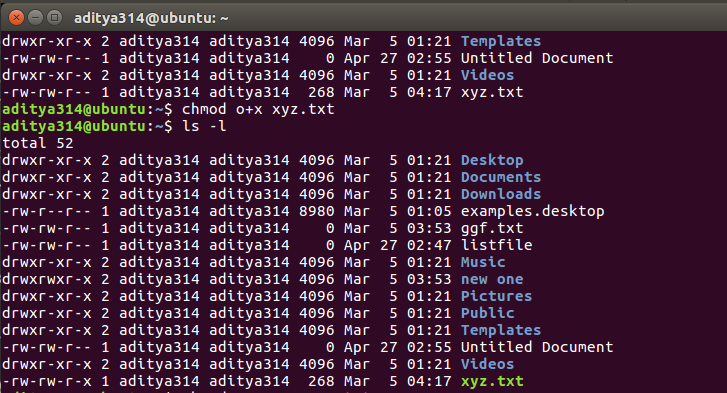 You can also change multiple permissions at once. For example, if you want to take all permissions away from everyone, you would type

Another example can be this:

There can be numerous combinations of file permissions you can invoke, revoke and assign. You can try some in your linux system. 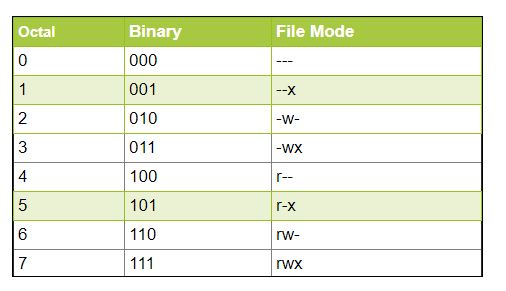 Using the octal notations table instead of ‘r’, ‘w’ and ‘x’. Each digit octal notation can be used of either of the group ‘u’,’g’,’o’.

So, the following work the same.

Both of them provides full read write and execute permission (code=7) to all the group.

Same is the case with this..

Both the commands give all permissions (code=7) to user and group, read and execute (code=5) for others.

The default Linux security model is a bit inflexible. To give special access (such as modification privileges) to a group of people, you have to get your system administrator to create a group with those people in it. Furthermore, if you would like to give a different set of access privileges (such as read access) to another group of people, you can’t do it because you can only assign one group owner per file or directory. To solve this problem, you can use ACLs (Access Control Lists). You can learn more about them from this link: ACLs