The File::Slurp module is used to read contents of a file and store it into a string. It is a simple and efficient way of Reading/Writing/Modifying complete files. Just like its name, it allows you to read or write entire files with one simple call.
By importing this module to your program, the user can implement some functions like read_file, read_text, write_file, etc. to read and write content to/from the file.
Installation of File::Slurp Module:
To use this module, there is a need to first add it to your Perl language package. This can be done by using the following commands in your Perl Terminal and installing the required module.
Step 1: Open your terminal and run the following command: 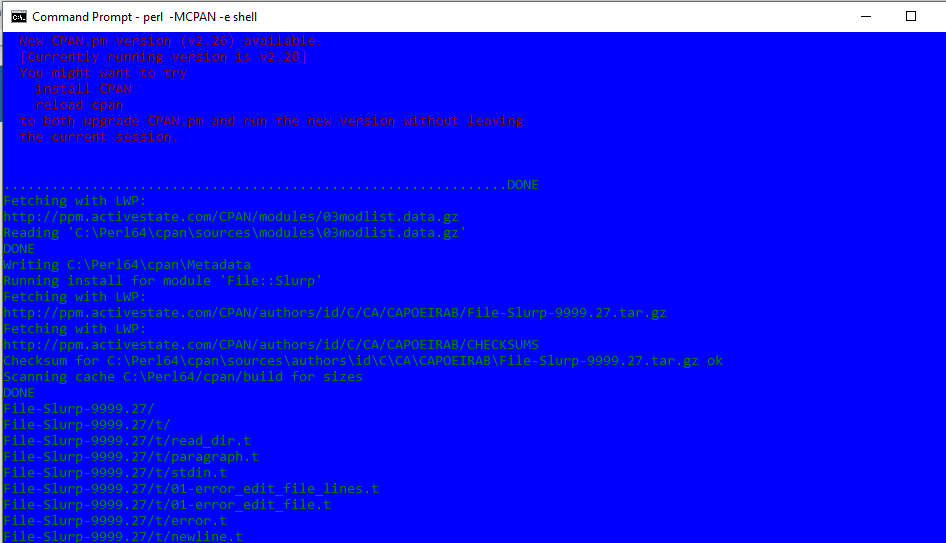 This will install the File::Slurp module.
Step 3: Type and run ‘q’ command to exit from the cpan> prompt.
read_file function in Slurp:
File::Slurp’s read_file function reads entire contents of a file with the file name and returns it as a string. However, the use of File::Slurp is not encouraged as it has few encoding layer problems that may cause issues during compilation. File::Slurper aims to be an alternative to avoid the above-mentioned issues.

Syntax:
use File::Slurp;
my $text = read_file($filename);
Return: It returns a string.

Syntax:
use File::Slurper;
my $content = read_text($filename);
Return: It returns a string.

Syntax:
use File::Slurp;
write_file($filename, $content);
Returns: It doesn’t return any value, just writes the content to the file.

Explanation:
In the above Perl code, initially, we used a slurp function to read a file named GFG_Slurp.txt containing some lines of text as an input into a scalar variable named $content and then wrote the contents of the file into another file Copyof_GFG_Slurp.txt as a single string.
Example2: Using Array to store file content

Explanation:
In the above Perl code, initially, we used a slurp function to read a file named GFG_Slurp2.txt containing an array of lines of text as an input into a array variable named @lines and then wrote the contents of the entire file into a file named Copyof_GFG_Slurp2.txt as a single string.
Example3: Creating a function to use slurp method

Explanation:
In the above Perl code, strict and warnings allow the user to enter code more liberally and catch errors sooner such as typos in variable names, etc. We called a user-defined function named get_a_string which in turn executes the slurp function i.e.., it reads a file containing some lines of text as an input into a variable named gfg_str and then wrote the contents of the entire file into a file as a single string.