Perl is universal and cross-platform programming language mainly used for text manipulation and used in developing many software application like web development, graphical user interface application etc. It is preferred over other programming languages as it is faster, powerful and Perl has a lot of shortcuts which helps in writing a quick script making it take less time for writing.
A directory is used in programming languages to store values in the form of lists. A directory is quite similar to a file. Just like a file, the directory also allows performing several operations on it. These operations are used for the modification of an existing directory or creation of a new one.

Different operations that can be performed on a Directory are:

To create a directory mkdir(PATH, MODE) is used. This function helps to create a new directory, if the user wants to check that the file already exists, it can be done by -e function. The path is been set by PATH using the mode which is specified by MODE function.
Example: 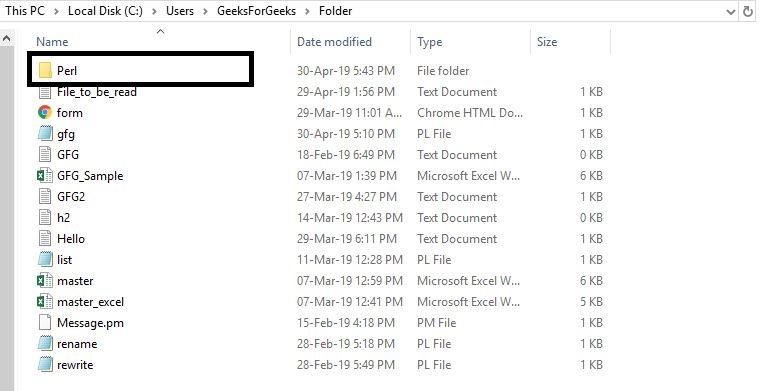 To open a directory in Perl a short function opendir DIRHANDLE, PATH is used. The PATH here is the path of the directory to be opened.
Example :

Example 2: When chdir() is called directly on the terminal

To close a directory closedir DIRHANDLE is used. Here, DIRHANDLE is the handle of the Directory with which it is opened using opendir function.
Example:

Removing a Directory can be done by using rmdir function. This function removes the specified directory by FILENAME only if that directory is empty, if it succeeds it returns true, otherwise false.
Example: