Performance of a Network

BANDWIDTH
One of the most essential conditions of a website’s performance is the amount of bandwidth allocated to the network. Bandwidth determines how rapidly the webserver is able to upload the requested information. While there are different factors to consider with respect to a site’s performance, bandwidth is every now and again the restricting element.

Bandwidth in Bits per Seconds: It refers to the number of bits per second that a channel, a link, or rather a network can transmit. For example, we can say the bandwidth of a Fast Ethernet network is a maximum of 100 Mbps, which means that the network can send 100 Mbps of data.

THROUGHPUT
Throughput is the number of messages successfully transmitted per unit time. It is controlled by available bandwidth, the available signal-to-noise ratio and hardware limitations. The maximum throughput of a network may be consequently higher than the actual throughput achieved in everyday consumption. The terms ‘throughput’ and ‘bandwidth’ are often thought of as the same, yet they are different. Bandwidth is the potential measurement of a link, whereas throughput is an actual measurement of how fast we can send data.

Throughput is measured by tabulating the amount of data transferred between multiple locations during a specific period of time, usually resulting in the unit of bits per second(bps), which has evolved to bytes per second(Bps), kilobytes per second(KBps), megabytes per second(MBps) and gigabytes per second(GBps). Throughput may be affected by numerous factors, such as the hindrance of the underlying analogue physical medium, the available processing power of the system components, and end-user behaviour. When numerous protocol expenses are taken into account, the use rate of the transferred data can be significantly lower than the maximum achievable throughput.

For the difference between Bandwidth and Throughput, refer.

High latency leads to the creation of bottlenecks in any network communication. It stops the data from taking full advantage of the network pipe and conclusively decreases the bandwidth of the communicating network. The effect of the latency on a network’s bandwidth can be temporary or never-ending depending on the source of the delays. Latency is also known as a ping rate and is measured in milliseconds(ms).

Transmission Time: Transmission time is a time based on how long it takes to send the signal down the transmission line. It consists of time costs for an EM signal to propagate from one side to the other, or costs like the training signals that are usually put on the front of a packet by the sender, which helps the receiver synchronize clocks. The transmission time of a message relies upon the size of the message and the bandwidth of the channel.

Processing Delay: Processing delay is the delay based on how long it takes the router to figure out where to send the packet. As soon as the router finds it out, it will queue the packet for transmission. These costs are predominantly based on the complexity of the protocol. The router must decipher enough of the packet to make sense of which queue to put the packet in. Typically the lower-level layers of the stack have simpler protocols. If a router does not know which physical port to send the packet to, it will send it to all the ports, queuing the packet in many queues immediately. Differently, at a higher level, like in IP protocols, the processing may include making an ARP request to find out the physical address of the destination before queuing the packet for transmission. This situation may also be considered as a processing delay. 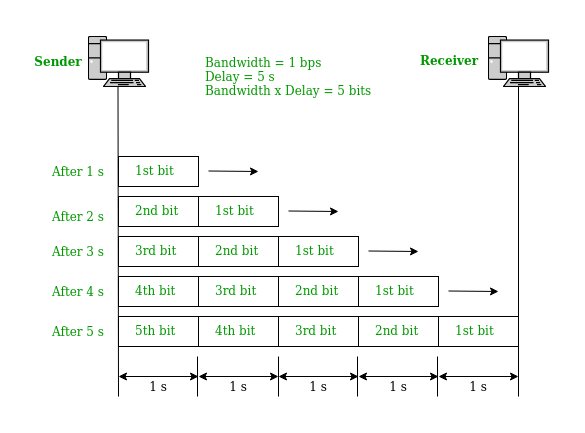 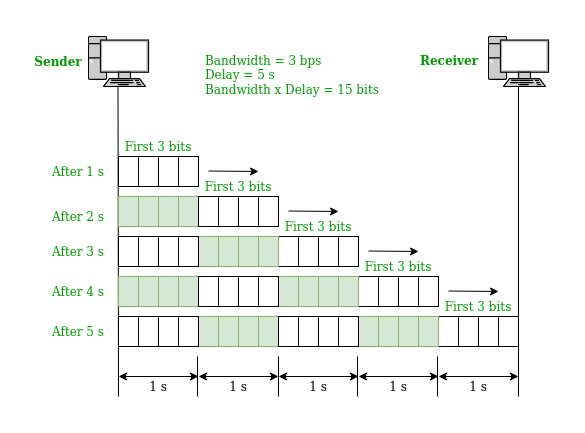 For both examples, the product of bandwidth and delay is the number of bits that can fill the link. This estimation is significant in the event that we have to send data in bursts and wait for the acknowledgement of each burst before sending the following one. To utilize the maximum ability of the link, we have to make the size of our burst twice the product of bandwidth and delay. Also, we need to fill up the full-duplex channel. The sender ought to send a burst of data of (2*bandwidth*delay) bits. The sender at that point waits for the receiver’s acknowledgement for part of the burst before sending another burst. The amount: 2*bandwidth*delay is the number of bits that can be in transition at any time.

Simply, jitter is any deviation in, or displacement of, the signal pulses in a high-frequency digital signal. The deviation can be in connection with the amplitude, the width of the signal pulse or the phase timing. The major causes of jitter are electromagnetic interference(EMI) and crosstalk between signals. Jitter can lead to flickering of a display screen, affects the capability of a processor in a desktop or server to proceed as expected, introducing clicks or other undesired impacts in audio signals, and loss of transmitted data between network devices.

A jitter buffer can reduce the effects of jitter, either in a network, on a router or switch, or on a computer. The system at the destination receiving the network packets usually receives them from the buffer and not from the source system directly. Each packet is fed out of the buffer at a regular rate. Another approach to diminish jitter in case of multiple paths for traffic is to selectively route traffic along the most stable paths or to always pick the path that can come closest to the targeted packet delivery rate.