As we all know, the air is a gas combination. The atmosphere is composed of several gases. These are nitrogen, oxygen, argon and other trace gases. Because the atmosphere was empty of oxygen around 4.6 billion years ago, there was no life on Earth. Oxygen is abundant in the atmosphere. It is the second most prevalent gas in the atmosphere, necessary for the survival of most living forms on Earth, and may also be present in biomolecules such as proteins and nucleic acids.

Oxygen is created in nature in two different ways. They are: 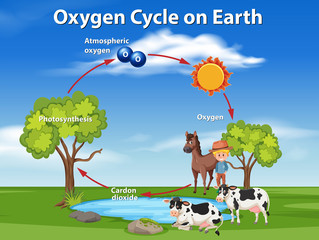 Stages of the Oxygen Cycle

Question 1: What is the oxygen cycle?

To circulate oxygen atoms around the world, the oxygen cycle employs a number of sophisticated mechanisms.

Question 2: What is a biogeochemical cycle?

A biogeochemical cycle is the movement or rotation of elements through the biotic and abiotic spheres of an ecosystem.

Question 3: Importance of the oxygen cycle?

The major cycles in the biosphere are respiration and photosynthesis. When animals and people breathe, they absorb oxygen for metabolic use and produce carbon dioxide.

Question 4: What is the oxygen cycle in simple terms?

The oxygen cycle is the movement of oxygen in nature in various forms. Only nitrogen has more uncombined constituents in the atmosphere than oxygen, which is both free and dissolved in water. Plants and animals utilize oxygen to breathe and return it to the atmosphere and water as carbon dioxide (CO2).

Question 5: What is the role of respiration in the oxygen cycle?

The aim of breathing in the oxygen cycle is to release carbon dioxide, which is then taken up by plants for photosynthesis, which releases oxygen for human breathing, which creates carbon dioxide for plants again, and so on.