The only compound data types native to Osmosian Plain English are records and doubly-linked lists. When we need to sort a list, we use the simple recursive merge sort that I’ll describe below. But first we need something to sort. Let’s sort fruits, and let’s begin with a type definition:

When the word “thing” appears in a type definition, our compiler works a little magic behind the scenes to make things (pun intended) more powerful and flexible. The above definition, for example, actually causes the following data types to be defined: 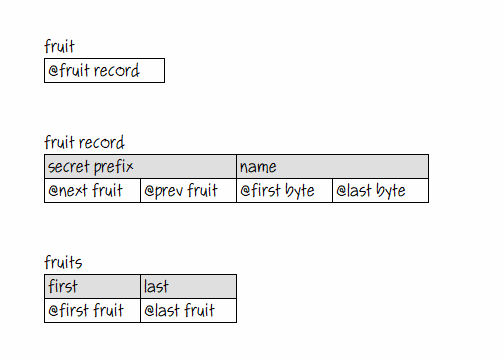 So a Fruit is really nothing but a pointer containing the address of a Fruit Record.

And each 16-byte Fruit Record has a hidden 8-byte prefix with two pointers for linking these records into lists, together with the fruit’s name, which is a string. Plain English strings are stored in the Heap and can be any length. So the Name in the Fruit Record is actually just two pointers to the first and last bytes of the string on the Heap, respectively. String memory is managed automatically, but thing memory is managed by the programmer.

The third type generated by the compiler serves as the anchor for lists of Fruit Records. Such lists are simply (and intuitively) called Fruits, the plural of Fruit.

Now let’s add some fruits to a list, in random order, and sort them. Here are the top level sentences in our test program:

And here are the routines that will be called to “Create some fruits”:

Now we’re ready to sort. This is the sort routine:

When we run this program, the output on the console looks like this: 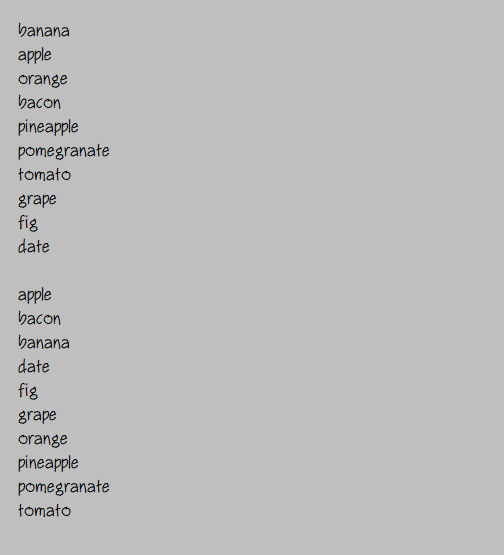 But is it fast? Let’s see using this modified test program:

The fruits this time, at the start, look like this:

And the output on the console looks like this:

Not quite linear, I admit. But not exponentially bad, either. Ten times as many records take roughly ten times as long to sort. There’s a technical way of saying this using big “O’s” and little “n’s’ and “logs” and stuff, but Plain English programmers don’t generally think that way. And it’s stable, as a Plain English programmer would expect — records with duplicate sort values retain their original sequence.