The multi-Dimensional Data Model is a method which is used for ordering data in the database along with good arrangement and assembling of the contents in the database.

The Multi Dimensional Data Model allows customers to interrogate analytical questions associated with market or business trends, unlike relational databases which allow customers to access data in the form of queries. They allow users to rapidly receive answers to the requests which they made by creating and examining the data comparatively fast.

OLAP (online analytical processing) and data warehousing uses multi dimensional databases. It is used to show multiple dimensions of the data to users.

It represents data in the form of data cubes. Data cubes allow to model and view the data from many dimensions and perspectives. It is defined by dimensions and facts and is represented by a fact table. Facts are numerical measures and fact tables contain measures of the related dimensional tables or names of the facts. 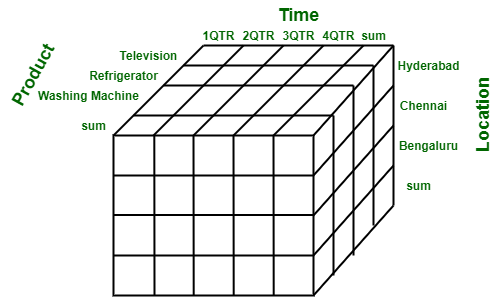 Working on a Multidimensional Data Model

On the basis of the pre-decided steps, the Multidimensional Data Model works.

The following stages should be followed by every project for building a Multi Dimensional Data Model :

Stage 1 : Assembling data from the client : In first stage, a Multi Dimensional Data Model collects correct data from the client. Mostly, software professionals provide simplicity to the client about the range of data which can be gained with the selected technology and collect the complete data in detail.

Stage 2 : Grouping different segments of the system : In the second stage, the Multi Dimensional Data Model recognizes and classifies all the data to the respective section they belong to and also builds it problem-free to apply step by step.

Stage 3 : Noticing the different proportions :  In the third stage, it is the basis on which the design of the system is based. In this stage, the main factors are recognized according to the user’s point of view. These factors are also known as “Dimensions”.

Stage 4 : Preparing the actual-time factors and their respective qualities : In the fourth stage, the factors which are recognized in the previous step are used further for identifying the related qualities. These qualities are also known as “attributes” in the database.

Stage 6 : Building the Schema to place the data, with respect to the information collected from the steps above : In the sixth stage, on the basis of the data which was collected previously, a Schema is built.

1. Let us take the example of a firm. The revenue cost of a firm can be recognized on the basis of different factors such as geographical location of      firm’s workplace, products of the firm, advertisements done, time utilized to flourish a product, etc. 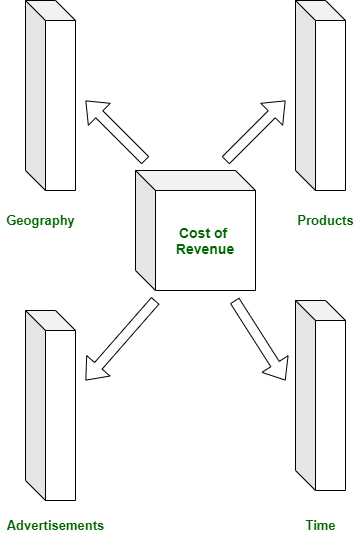 2. Let us take the example of the data of a factory which sells products per quarter in Bangalore. The data is represented in the table given below :

In the above given presentation, the factory’s sales for Bangalore are, for the time dimension, which is organized into quarters and the dimension of items, which is sorted according to the kind of item which is sold. The facts here are represented in rupees (in thousands).

This data can be represented in the form of three dimensions conceptually, which is shown in the image below : 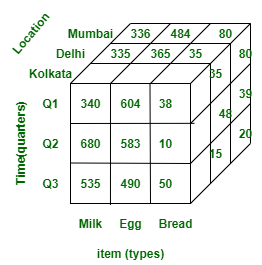 The following are the advantages of a multi-dimensional data model :

The following are the disadvantages of a Multi Dimensional Data Model :