To install on Debian based system like ubuntu or kali Linux run the command:

To install on systems like CentOS / Fedora / RHEL Linux run the command:

To monitor specific task running on a system run the pidstat with -p argument and after -p argument write the PID of taste but to monitor all current active task on the system we can use pidstart -p All command which is equivalent to just pidstat command, Now let’s see how will be the output of pistat to see active tasks run the following command on terminal:

The output shows the following information about the system:

pidtstat show the following common information about the tasks:

1) -C string: This argument shows the tasks which contain the given string in their command name. To use the -C option with the pidstat run the following command:

The following image shows the output of pidstat with the -C option and sys as a string. We can see that this output contains tasks that contain sys in their command name.

2) -d: This option shows the output similar to pidstat command but with some different information about the system. To use the -d option on the system use the following command.

The following image shows the output of the command :

3) -w: This is the argument that shows the task switching activity of tasks following is the output of the command 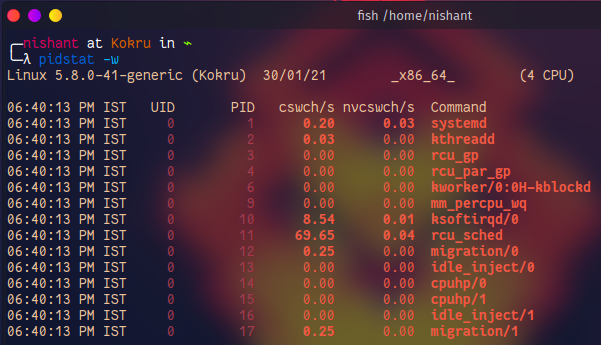 In this output there are two different terms we can see:

4) -t: This option is used to display statistics for threads associated with selected tasks. The output padstat with this command is

In this output, there are two different terms we can see:

5) -p: With this argument, we can see information about the specific task by using its PID. Following is the command to use the -p option.