Magnetic Field Due to Solenoid and Toroid

A charge is surrounded by an electric field when it is sufficiently sluggish and sits idle. This would make sense to you because it is an electric charge. However, when that charge becomes excited and starts racing about, it generates a magnetic field. Doesn’t this strike you as strange? You aren’t alone, believe me! Both fields are part of the same force of nature, as physicists discovered later: electromagnetism! The notion of electromagnetism is used by a solenoid.

The solenoid is a wire coil that works as an electromagnet when electricity flows through it. Electromagnetic solenoids are used in a variety of applications across the world.

It’s nearly impossible to swing a bat without striking a solenoid. Solenoids are found in both speakers and microphones. In reality, a speaker and a microphone are essentially the same things when seen from the opposite perspective. Solenoids are used in a variety of solenoid engines because the coils may be reinforced by adding an iron core. Solenoids, like bar magnets, are made up of a large coil of wire wrapped in many turns that generates a homogeneous magnetic field when electricity is delivered through it.

Solenoids are available in a variety of designs, materials, and functions. However, they all operate on the same electrical principles:

Consider an amperian loop and integrate along each side with sides abcd. The field in bc and da is perpendicular to dl. The field is zero along cd. The field component is 0 for transverse sections bc and ad. As a result, these two parts have no value. Let B be the field along ab. As a result, L = h is the appropriate length of the Amperian loop. The total number of turns is nh if n is the number of turns per unit length. 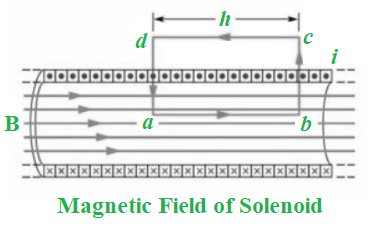 Ie = I (n h) is the enclosed current where I is the current in the solenoid.

The right-hand rule determines the field’s orientation. A solenoid is a device that is often used to create a consistent magnetic field.

The term “long solenoid” refers to a solenoid with a longer length than the radius. It is made out of a long wire coiled in the shape of a helix with closely spaced neighbouring turns. As a result, each turn may be thought of as a circular loop. The net magnetic field is the vector sum of all the turns’ fields. The turns are isolated from one other by using enamelled wires for winding.

The magnetic field within a long solenoid is,

where, n denotes the number of turns per unit length and I denote the current flowing through the solenoid.

The magnetic field at one end of the long solenoid is as follows:

Properties of a Solenoid

Force on rod = Change in magnetic field energy/distance travelled by the rod within the solenoid.

They’re suitable for a certain type of door locking mechanism. Electromagnets are used in these locking systems, making them extremely secure.

A toroid is a doughnut-shaped hollow circular ring with numerous turns of enamelled wire coiled so close together that there is no room between them. When high inductances are required at low frequencies, a toroid can be thought of as a circular solenoid utilised in an electric circuit as an inductor. 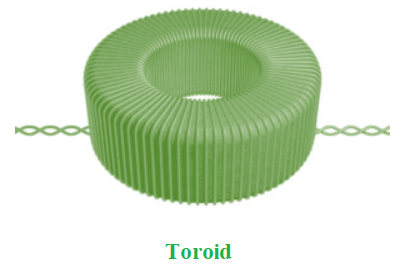 An infinite solenoid in the shape of a ring is known as a toroid. The magnetic field within a toroid may be calculated as follows:

where, I denote the amount of current passing through the solenoid.

Let r be the toroid’s average radius and n be the number of turns per unit length, then:

Question 1: What are the differences between solenoid and toroid?

The solenoid is cylindrical in shape while the toroid is circular in shape.

The magnetic field inside the solenoid is uniform while non-uniform in toroid.

Question 2: What are the similarities between solenoid and toroid?

Question 3: What is the magnetic field in the empty space enclosed by the toroid of radius R?

Question 4: What is the Nature of Magnetic Field Inside a Solenoid?

The magnetic field within a solenoid is always uniform, which means it has the same magnetic force across the coil.

Question 5: A long solenoid is made by tightly wrapping wire with a radius of 1 mm around a cylindrical frame until the consecutive turns almost touch. If a solenoid carries a current of 2 A, what is the magnetic field at its centre?