Every Java Programmer is familiar with NullPointerException. It can crash your code. And it is very hard to avoid it without using too many null checks. So, to overcome this, Java 8 has introduced a new class Optional in java.util package. It can help in writing a neat code without using too many null checks. By using Optional, we can specify alternate values to return or alternate code to run. This makes the code more readable because the facts which were hidden are now visible to the developer.

To avoid abnormal termination, we use the Optional class. In the following example, we are using Optional. So, our program can execute without crashing.

The above program using Optional Class

Optional is a container object which may or may not contain a non-null value. You must import java.util package to use this class. If a value is present, isPresent() will return true and get() will return the value. Additional methods that depend on the presence or absence of a contained value are provided, such as orElse() which returns a default value if the value is not present, and ifPresent() which executes a block of code if the value is present. This is a value-based class, i.e their instances are :

Static Methods: Static methods are the methods in Java that can be called without creating an object of the class. They are referenced by the class name itself or reference to the object of that class.

Important Points: Since Static methods belong to the class, they can be called to without creating the object of the class. Below given are some important points regarding Static Methods :

The following table shows the list of Static Methods provided by Optional Class :

Instance Methods: Instance methods are methods that require an object of its class to be created before it can be called. To invoke an instance method, we have to create an Object of the class within which it is defined.

Important Points: Instance Methods can be called within the same class in which they reside or from the different classes defined either in the same package or other packages depending on the access type provided to the desired instance method. Below given are some important points regarding Instance Methods :

The following table shows the list of Instance Methods provided by the Optional Class : 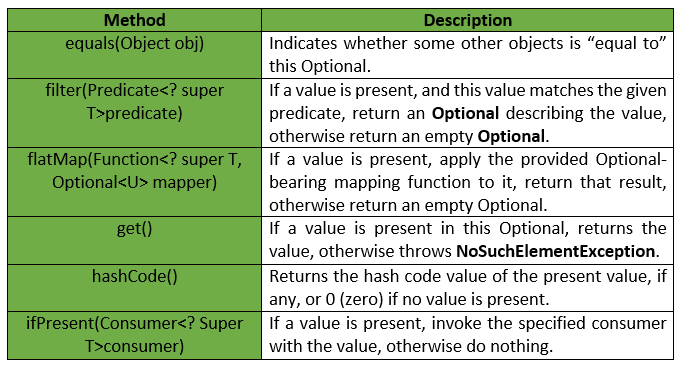 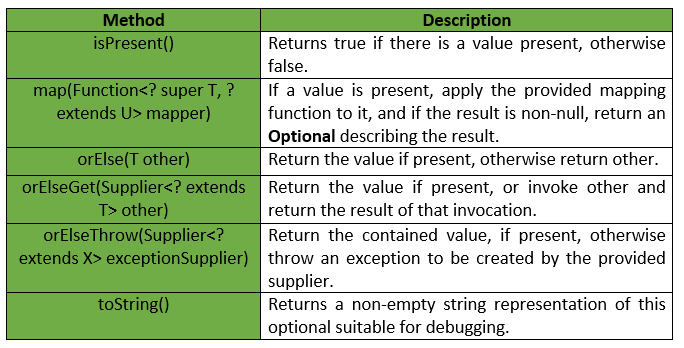 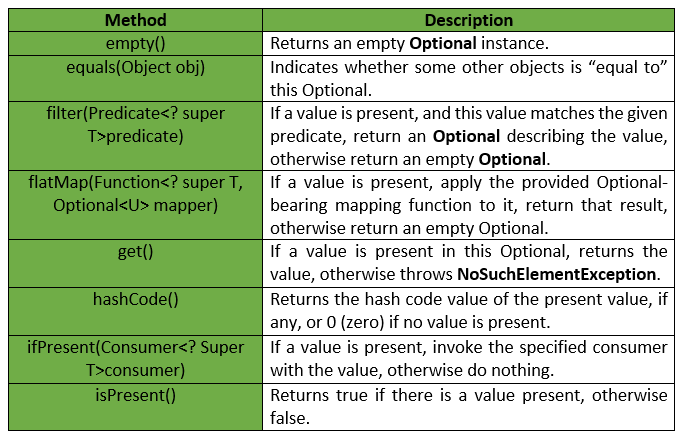 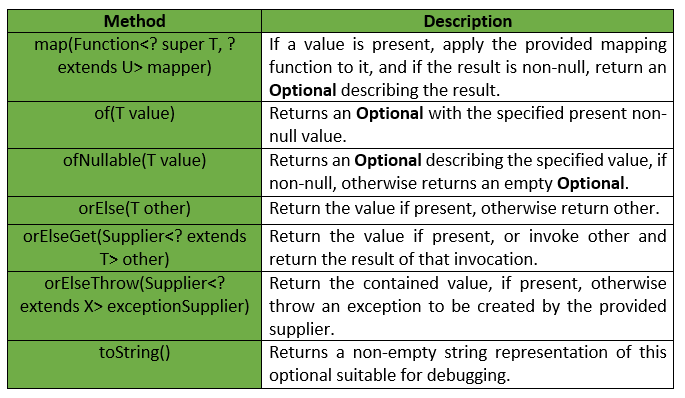 Below given are some examples :

This article is contributed by loginakanksha and Sahil Bansal . If you like GeeksforGeeks and would like to contribute, you can also write an article using write.geeksforgeeks.org or mail your article to review-team@geeksforgeeks.org. See your article appearing on the GeeksforGeeks main page and help other Geeks. Please write comments if you find anything incorrect, or you want to share more information about the topic discussed above.